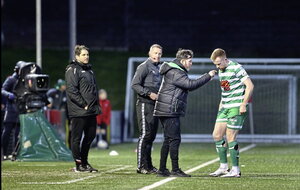 Stephen Bradley's Hoops saw off Macedonia side Shkupi to secure European group stage football and because of that Higgins believes their confidence will be sky high.

"They'll be buzzing coming into our game and fair play to them," he insisted. "They've been great and they have qualified deservedly so.

"It also just shows you what's achievable when you're in a position to build something over a long period of time.

"They've been excellent and good luck to them."

The Candystripes go into this evening's game unbeaten domestically in their last seven games and Higgins wants his players to carry that form on against the league leaders.

When the sides last met at the Brandywell in February, Jamie McGonigle's stunning late strike won City the points and the Limavady man admits a repeat of their stoppage time victory would do nicely.

"We've taken 10 points from the last 12 in the league and the players have been excellent and we just want that form to continue," he added.

"We want to go and put in a really good performance on Friday and try to take the three points.

"Give me a repeat of the last time we played each other at the Brandywell, I would take it.

"Look, that's a great memory in the season, so early on in the season as well and hopefully we can pack the Brandywell out on Friday and put in a big performance and try to pick up a huge three points."

The Derry boss also confirmed that midfielder WIll Patching is expected to miss out again, but he feels the squad is going to be a better place this week, as new signings Ryan Graydon, Declan Glass and Sadou Diallo are reaching match fitness.

"Physically this game will bring them on, fitness wise," he explained.

"We're going to be in a better place this week than what we were last week (at Dundalk) in terms physically and it's a game for the boys to look forward to, embrace and enjoy the encounter.

"Shamrock Rovers are obviously way out in front and they are without doubt huge favourites to retain the title and it's just up to ourselves and the rest of the chasing pack to try and put a wee bit of pressure on them and see what happens."