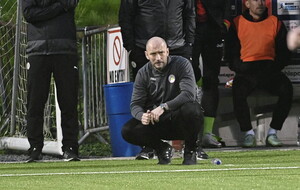 Cliftonville Manager Paddy McLaughlin is a big admirer of Mallon's

CLIFTONVILLE’S exciting new signing Stephen Mallon wants to entertain the Reds faithful this season – but has no intentions of “doing a load of tricks and getting beaten 1-0”.

Paddy McLaughlin’s capture of the stylish Belfast native could turn out to be one of the smartest pieces of transfer business this year, and the signs in pre-season are already hugely encouraging for the Cliftonville manager.

The much-travelled 23-year-old was signed on a permanent deal from Bohemians and is looking to nail down one of the attacking wide berths in Saturday’s opening Danske Bank Irish Premiership game away to Coleraine.

Conor McDermott and Michael McCrudden are among those who have left Solitude over the summer with striker Ronan Hale coming in from Larne to bolster McLaughlin's attacking options.

Asked what he can offer his new team, the former Sheffield United player said: “There is obviously unbelievable talent in the Cliftonville team, great players in the squad.

“I think I’m a bit more direct in what they’ve had, so hopefully I can add that directness, getting at players and really getting fans off their seats and getting them excited.

“For me, the main thing is to enjoy it. I enjoy doing things that get fans excited, as well as getting goals and assists and contributing to the team. I don’t want to go out do a load of tricks and get beaten 1-0, but it’s what I can contribute to the team.”

Mallon played youth football for west Belfast club St Oliver Plunkett before making a cross-channel move to Sheffield United in 2019. He was later loaned out to Australia’s AFL side Central Coast Mariners for six months and secured another loan deal with Derry City on his return.

After a spell with Bohs last season, Mallon is back in his home city plying his trade but still has his heart set on getting back to England.

“Obviously the target is to get back there but at the same time my job is with Cliftonville so I’m not really thinking about anything other than doing well here and then see where that takes me. But my end goal would go back to England,” he said.

Mallon was convinced Cliftonville was the right move for him given McLaughlin’s previous interest in trying to sign the wide man.

“Even when I was trying to get out on loan there was always interest from Paddy,” Mallon said.

“But once I knew I was coming home I just knew I was going to sign for Cliftonville and when you’ve a manager who really wants you there, that helps. I’ve had a great start and am really enjoying it so far.”

Injury has probably derailed his aspirations of cutting it in England, but those disappointments haven’t dampened his desire to fulfil his potential going forward.

“For me, the toughest moments in England were when you were injured. Up to now, my career has been interrupted with injury every season.

“Having those injuries and being away from home is a lot tougher because you’re back to digs or an apartment by yourself and sitting in a room alone.

“You don’t have people to talk to. In those moments when you’re injured, you’re in your own head really and it’s not a nice place to be.

“In saying that, I’ve never wanted to do anything else. I know I’ll not give up on my football career – I’ve never thought about doing other things because I’m so focused on Plan A and having a football career.

“Obviously there are things I’ve done that I probably regret, maybe my attitude as a kid, but I wouldn’t change any of them because if I did I probably wouldn’t be the same person or in the place I am today.”