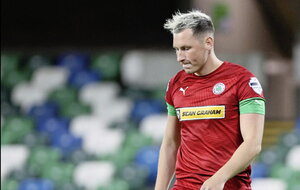 THIS season’s Danske Irish Premiership, which gets underway this weekend, couldn’t have been marketed any better by NIFL officials – but Oran Kearney fears the financial chasm between the top clubs and the rest could damage the competitiveness of the league over the next few years.

At their all-singing, all-dancing media launch at Danske headquarters in Belfast’s city centre last week, the financial muscle of the likes of Linfield, Glentoran and Larne was duly noted by NIFL officialdom who acknowledged 'bridging the gap' was one of their more pressing challenges.

Kearney’s Coleraine side have punched above their weight for the last number of seasons but if the current financial trends continue, he definitely envisages the Irish Premiership resembling the Scottish Premier League where it’s a two-horse race between Celtic and Rangers before a ball is kicked.

“I wouldn’t say there’s a league within a league here, but there’s a risk of that happening like some leagues across the planet,” said Kearney.

“You look at Scotland and you’ve your top two, then other mini-leagues below that. The biggest joy over the last six or seven years is just how competitive the league has been.

“Crusaders got to the top, Cliftonville and ourselves had a right go too. Five or six teams have had a real charge at it and you’d hope over the next 10 years it’ll remain that way but with the landscape and how it has changed I’m not so sure…

“What Cliftonville did last year and what we did the few years previously to that was a phenomenal effort, but it’s only going to get harder and we all know that.

“But you’ve got to find a way. We keep saying that to the players, that we’ve got to hang on to the coat-tails of these clubs and find a way.”

The Blues, the Glens and Larne have the economic capacity to go full-time while Crusaders’ operate with a hybrid model where some players are full-time and others remain part-time.

NIFL is also eager to sell their product across Friday, Saturday and Sunday every weekend to maximise its reach but Kearney also regards this to be another inadvertent advantage to the full-time clubs.

“It’s been alluded to about full-time and part-time,” he said.

Kearney, whose side host Cliftonville in their league opener this Saturday, wasn’t making any grand predictions ahead of the new season, but is excited about the beginnings of a new cycle at Ballycastle Road.

“Every year you just want to be the best that you can be. I suppose over the last five or six years we’ve punched above our weight and last season probably left us all a bit disappointed - getting to a cup final and finishing in the top six against the standard of teams and all that is there probably wasn’t the worst, but we were probably harsh on ourselves because of how we’ve done in recent seasons.

“It’s about trying to push on again. We’ve hit the reset button, we’ve done a fair bit of transfer business, more than what we’d normally do and there’s a real freshness there.

“It was an end of a cycle and we’re in a place now where we’re ready to start a new one. And there’s a real vibrant feel about it again.”

Given Coleraine’s budget compared to other clubs, Kearney is undoubtedly one of the top performing managers in the top flight for over a decade that included a brief stint with Scottish Premier League club St Mirren.

“It’s the difference between a player at 17 to when he’s 27. The 27-year-old player should be a better version of the 17-year-old player. I’d like to think that I’ve a better skill-set than 10 or 11 years ago,” Kearney added.

“I’ve made loads of mistakes and I’ll probably make loads more in the future, that’s part of life, it’s part of football.

“I was never a mad shouter and I think particularly as I’ve got older I probably shout less and less because it makes so little impact. Your hard work is done throughout the week. You can’t stand and talk 11 people through a game for 90 minutes. I think all those things evolve with you as well.”