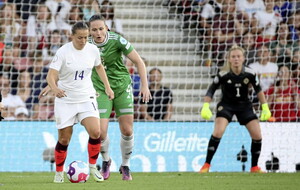 And after that the dark

And may there be no sadness of farewell

Those lines, aptly from 'Crossing the Bar', by Alfred, Lord Tennyson, who often sailed the Solent from Southampton to his home on the Isle of Wight, were fitting as NI's first major tournament officially ended in a 5-0 defeat.

While the sun had already set on Northern Ireland's Euros odyssey, the dream has not died; indeed the afterlife of this tournament will ripple onwards and outwards for years to come.

The atmosphere afterwards wasn't a wake, or at least only an Irish one, as the party started early, with both sets of supporters thoroughly enjoying themselves – albeit partly because the English have, ahem, 'borrowed' both 'Sweet Caroline' and the striker's '….on fire, your defence is terrified' song from the Green and White Army.

England sank the girls in green, of course they did. The subs the tournament subs were able to bring on are seriously talented: Alex Greenwood, Ella Toone, Alessia Russo, Chloe Kelly, Jess Carter.

Long before the game was over a host of blonde pony-tails had been powering towards the beleaguered green rear-guard like a Ride of the Valkyries, aiming to kill them off.

Yet after the burst of goals from Fran Kirby and Beth Mead shortly before the interval, then another rapid brace from half-time sub Alessia Russo, only an own goal from the unfortunate Kelsie Burrows ensued in the final 40 minutes.

Mead came close to doubling her tally, and Russo really should have completed here hat-trick late on then Mead turned provider, but she skied her shot from the clever cut-back.

Kenny Shiels's side had held out for the first 38 minutes, and the last 40 of play, and even threatened to find the net themselves on a couple of occasions against a ruthless team whose for and against tally over their past 11 competitive matches is now 82-0.

Forty years on from when the men's team had stunned tournament hosts – at the 1982 World Cup in Spain – NI almost took an amazing first minute lead.

Shiels had made only one change to the team that lined out against Austria, with Laura Rafferty coming into her hometown pitch in place of Chloe McCarron. The Southampton player certainly slotted in comfortably, sticking closely to Kirby, and restricting her influence for long periods.

She also sent a sweet pass forward for Wade to chase up the right flank and she outpaced Rachel Daly and cut inside, but her shot was parried out by Mary Earps.

After that, though, the game mostly took on the anticipated pattern, with England pouring forward.

England were unchanged, again, sending out the same team for their third Group A game, although there was an alteration in their dug-out as boss Sarina Wiegman has Covid, so her assistant Arjan Veurink took charge.

England also had to change their socks, to a red and orange combo, so as not to clash with NI's white, with 'the girls in green' finally allowed to don their home kit

Suitably attired, Northern Ireland were inspired, even if captain Marissa Callaghan was finding it tough to contain the repeated runs forward of Georgia Stanway.

The Swiss ref also offered England an early chance to score, awarding them a penalty after just five minutes, when Stanway's shot hit the arm of the advancing Rafferty.

However, the ball was clearly going to hit the NI woman's body, although, after a lengthy VAR check and the referee going to the pitch-side monitor, the spot-kick was apparently overturned for an earlier English handball.

With Keira Walsh pulling the strings from central midfiekd, Stanway then forced goalkeeper Jackie Burns to hack a shot away, and the English number 10 also had a shot half-blocked with Burns saving then Callaghan clearing.

In between Wade had another opportunity after a Rebecca Holloway interception, but the Glentoran Woman's shot off her weaker left foot was no threat.

NI's defensive effort was much better, helped by the match official letting challenge go, with both teams getting stuck in.

Kellie Bright also put plenty of oomph into a long-range right foot shot, but Burns plunged to her right to keep that out.

Lucy Bronze head-and-shouldered a Mead cross across the face of goal and just wide, before Bright tried her luck again from distance – but that effort was woeful.

England were getting, being frustrated – until the breakthrough came in the 40th minute. Hemp had a shot blocked but Kirby controlled the loose ball and bent it beautifully past Burns's leap.

With their crowd lifted, England raised their game, and only a brave block from Rafferty stopped a Stanway drive.

Yet a minute later it was 2-0. Julie Nelson headed away but Mead controlled calmly with her right boot before guiding in a low left-footed shot into the bottom corner via a deflection off the outstretched foot of Rachel Furness.

England made three half-time chances, and switched Mead to the right with Hemp going to the left and the former really began to torture the NI defence.

Toone's slipped pass allowed Mead to clip a cross which Russo headed in emphatically in just the second minute of the second half.

The fourth goal was even better. Toone guided a pass to her Manchester United team-mate Russo, whose drag-turn bamboozled the green defence, and she teed herself up for a fine finish.

The England pressure continued, but the only goal came with 15 minutes of normal time to go – and yet again Mead was involved. Her lofted pass seemed to pose little danger but Burrows swung a boot at it and the ball looped over the stranded Burns and in.

There were a couple of lovely moments late on in the game as Callaghan received an ovation when she was replaced by Emily Wilson, while Ashley Hutton – whose late goal in Wales was key to qualification – replaced fellow veteran centre half Julie Nelson. The latter was also acclaimed, not least for her goal in the opening game, making her NI's first female scorer at a major tournament and the oldest ever at the Women's Euros.

Hutton later announced her retirement, but there is more to come from the NI Women, and the partying is probably still going on…