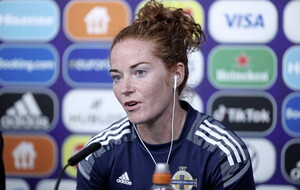 SHE'S not the type to break out in song, but Marissa Callaghan might have been tempted to grab the mike and launch into her own version of that 'Starship' classic 'Nothing's Gonna Stop Us Now'.

On the pitch in Southampton tonight Norway will almost certainly prevail, but the Northern Ireland Women's captain was just delighted and excited to be a the St Mary's Stadium and "fit and ready to go."

The Cliftonville stalwart's participation had been in doubt ever since a toe injury sustained several weeks ago – indeed Sarah McFadden was initially listed to appear at yesterday afternoon's media conference.

However, 36-year-old Callaghan voiced her determination to lead her team out against the Norwegians, saying: "It has been a tough few weeks since the injury happened, but that is in the past and nothing was going to stop me being here.

"The coaching and physio teams have been great, I've had amazing support from everyone and I am ready to go. It was not just physically that I needed to get myself ready, but mentally as well."

Marissa acknowledged that she had worried about her participation in these Euros: "Well, obviously there's a little bit of fear – we're only human, aren't we? We sometimes think of the worst scenario before we can think of the best, so there was a couple of moments when I thought, 'Can I actually do this?'

"But I'm a very positive person and there was nothing that was gonna stop me from getting here. Thankfully so many people have helped me do that."

While she may be coming towards the end of her playing career, Callaghan hopes that many of her colleagues will progress to bigger and better things.

Striker Simone Magill's anticipated switch from Everton to Aston Villa was confirmed yesterday and Callaghan believes others can display their qualities in this proverbial 'shop window':

"It's a massive opportunity for a lot of the girls to, hopefully, perform really well and raise a few eyebrows. The likes of Demi Vance can show them what she's made of – she's a top, top player, but at the moment she's looking a club. She can go out and do the business and get a move. As well as her, we have a lot of young players too that hopefully can play well and opportunities will arise."

Although there were as many people in the media conference room as attended some previous internationals, Callaghan insisted that she and her colleagues were "surprisingly calm".

The dream has been realised. Northern Ireland Women have arrived.

Over to you, Marissa: 'And we can build this dream together, Standing strong forever…'