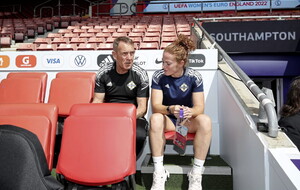 BRITISH and Irish involvement in Europe is often problematic and Kenny Shiels bore the troubled look of someone trying to square the circle of the Northern Ireland protocol.

Even having crossed the Irish sea border – by special plane – the NI boss struck a surprisingly sombre figure, perhaps unwilling to risk any further international incidents by cracking a joke or two.

There's no debating, though, that Shiels's side merit their place at this top table, and he is determined that they're not here merely to be 'whipping girls' for the rest of Group A, with familiar foes Austria and England to follow Norway as their opponents at the St Mary's Stadium.

Charles De Gaulle, a major influence on another continent-wide project, the European Economic Community, prevented British involvement, with Ireland kept out at the same time. Norway too, coincidentally.

Sixty years on, Shiels delivered a 'No' as emphatically as the French General had uttered his infamous 'Non', when the former asked if NI would alter their approach when taking on such a top team.

"No," insisted the Maghera man. "We play as we are; that success has got us here.

"I say to the girls all the time, 'Fear of failure is failure'. And we have worked off that template, that we shouldn't be or can't be afraid of other football teams. We need composure, we need be able to manoeuvre how they want to perform and how they want to play. We can't mess about with that in any shape or form."

For all that Shiels has got his team playing good football, that doesn't mean they'll go 'gung ho'.

The likelihood is that he will deploy three centre halves, with wing-backs, three in midfield, and a fluid front two.

If Callaghan is fit to start, the team mostly picks itself. The question marks are mostly over the third centre half, along with Sarah McFadden and Julie Nelson, and the third midfielder besides the skipper and leading scorer Rachel Furness. Chloe McCarron and Joely Andrews are the leading contenders for midfield, with the experienced Ashley Hutton and Kelsie Burrows strong options in defence.

Perhaps Shiels looked worried because of the quality of the opposition, although he exaggerated that, perhaps referring to recent form rather than actual rankings:

"Norway are the second best team in the world at the moment and obviously bringing Ada Hegerberg back has been a big advantage for them in terms of what they've done recently.

"It's going to be tough; I don't know the girl personally but she's certainly had a fantastic career. We know the qualities they have. They have very good players."

Yet he insisted that ensuring his players aren't overawed in these three group games is not the toughest task of his managerial career:

"No, there has been good two-way communication between the players and me and that was the first rung of the ladder.

"We had to understand each other and we've progressed since then. To progress as high as Norway is a big ask, but we will endeavour and work hard and smart to bridge that gap. They've been in nine semi-finals and six finals and what a record that is. That's how big this is.

"This is our debut day, our first game in a finals of a tournament and we will be very aware we are representing our nation and that we must not leave anything behind in terms of commitment and intelligence to get closer to Norway."

Geographically, the team is further away from Norway than normally, but Shiels hopes the full-time training camp for the many part-time players on his panel will pay off at these Euros:

"I feel they've learned a lot about themselves and have grown. It's harder for the players who have been around more, who haven't been around the professional environment, and then all of a sudden they are thrown in for six months...

"I feel we are in a better place now than what we were and we just want to get closer to the upper tier of international teams like Norway, like England and like Austria.

"We've had more time with the girls in the past six months, so psychologically we're in a better place already. The input from the players and the concentration and understanding of what we are trying to build is more evident to the players in this environment than it was when they were working in stores and shops.

"They have got more focus on themselves and their self-belief so we feel we can get closer to Norway."