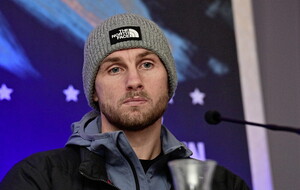 "I believe I am going to send Osadan back to Slovakia with a cauliflower arse," says Sean McComb. Pic Colm Lenaghan/ Pacemaker

FIVE-time European champion Karim Guerfi will be knocked out tomorrow night, said a typically forthright Michael Conlan as he looked into the Frenchman's eyes yesterday.

Guerfi didn't understand Conlan's words but he got their meaning when he and Conlan came together at their pre-fight press conference in the Devenish Complex in Belfast. After wishing each other ‘Good Luck' and ‘Bon Chance' respectively both predicted victories for themselves in the headline act of a stacked Conlan Boxing show at SSE Arena.

Guerfi may be the underdog but he cannot be written off and Conlan knows that.

“There's a bit of Kiko Martinez about him,” he said.

“He's been upsetting the applecarts left, right and centre and if I was to overlook him it could lead to an upset. But I haven't overlooked him, I've prepared very well.

“I was in with a bigger puncher in Miguel Marriaga and he did hit me clean once or twice but there were no effects. So it's a good fight, he's a dangerman, someone who doesn't know how to lie down and he'll come to win.”

Conlan took notice of Guerfi's performance against Jordan Gill in a European featherweight title fight last year. The Frenchman fired swinging left hand leads and followed them up with booming right hands as he took control of the fight in the middle rounds.

Gill was caught repeatedly when he retreated in straight lines and was perilously close to being stopped in the seventh after he had been floored by Guerfi's trademark left hook. The Englishman looked beaten for all money but somehow he conjured up the right hand of his life to knock Guerfi out at 2.59 of the ninth.

“I always stick to my own gameplan and my skills,” said Conlan.

“He commits (to fighting) but he doesn't commit enough and that's his downfall, that's where he gets tagged and gets hurt. He goes to come in but pulls out halfway through and that's where I'll land (my punches). So I need to be smart, bide my time and let it come.

“I've dropped a few sparring partners with head shots in this camp and I'm really feeling strong and powerful – especially my left hook as a southpaw.”

Conlan's last two fights have both featured action-packed final rounds. Against Leigh Wood (the 12th) Conlan was caught late and denied the world title that was in his grasp. Then, in August, Conlan dominated Marriaga and dropped him three times but switched off and was caught in the final round (the 10th).

He was temporarily in trouble but insists he has no issues with fitness or stamina.

“I know that won't happen again because that was just a mental issue by me in that last round against Marriaga,” he said.

“I watched it back and it wasn't like I was hurt or anything. It was a lapse in concentration and I got buzzed and I had to find a way (to hang in there) and thankfully I did. I don't think my fitness or my stamina are in question because I've been sparring 12 rounds with different sparring partners and I went through them all at pace with relative ease.

“I'm really looking forward to this fight. I've peaked at the right time, I'm hitting big numbers in my sessions and I want to show that.”

Even chastening experiences like losing to Wood in March can be put to good use if Conlan learns from them. He says he has and is now approaching the peak of his powers.

“You have to keep learning and experience these things along the way,” he says.

“In the ring you can't switch off for a second because anything can happen. I'm a much more developed fighter now. I'm definitely punching harder, I definitely feel much more rounded and confident in terms of what I'm doing.”

Taylor is ill and cannot travel and so Sean McComb's WBO European super-lightweight rumble with unbeaten Slovakian Zsolt Osadan (23-0-1) has been promoted to second-from-top on the bill.

McComb came close to quitting boxing when he was stopped by Gavin Gwynne early last year but he has bounced back and recovered the ground he lost to the Welshman.

“There was a lot of factors in the Gavin Gwynne loss – it was lockdown and there was a lot going on – but now I've completely put that behind me,” said McComb.

“I've got a new coach in Pete Taylor and finally I know now exactly what my style of boxing is so there's no better time than now to have a title fight. I'll thrive on the crowd and the atmosphere and the support I receive from the Belfast fans. He (Osadan) has never been in the ring with a six-foot southpaw who can box and fight and box middle-distance.

“I believe I'm a universal fighter and winning will get me recognised with the WBO and I know I belong in the top tier of boxing, the elite level. The better the opponent, the better I'll be.”

When asked for his prediction, showman McComb came up with an answer that bemused compere Ali Drew but delighted the locals in the crowd.

“I believe I am going to send Osadan back to Slovakia with a cauliflower arse,” he said, provoking howls of laughter.

KURT Walker has a fight to get his teeth into tomorrow night. The Lisburn Olympian is in against Yader Cardoza whose 47-fight (26-20-1) back catalogue includes a meeting with Jamie Conlan (now Walker's promoter) at the Waterfront Hall in 2018.

Conlan won on points but he had to get off the canvas to do so and Walker – whose last opponent literally got his teeth into him – expects a step up in quality at the SSE Arena.

“I think it's what I need,” said Walker.

“If I have it in my head that he carries power then I'll be at my best and I'll be alert but if I don't I might get complacent and that's what I don't want. I'm not talking myself up but when you've been to the Olympics people want to beat you.

“The last guy I fought in Belfast (Marcos Martinez) was game and it was the perfect fight for me because I was able to show my skills and I just need to keep getting better and fighting better opponents.

“If I'm in with someone who's game that gives me an edge and that's when you'll see the best of me and when Jamie suggested Cardoza, I just said: ‘Sweet'. That's my reply every time – one word.”

Saturday's fight will be the fourth of the year for Walker who trains in London with Adam Booth alongside Michael Conlan and Lewis Crocker (who is returning to action on Saturday night).

“I want to get the win and chill out for Christmas and have a good break,” he said.

“I've put a lot into this year training-wise and fighting-wise so it'll be an early Christmas present to get this done and relax with the family for a while.”