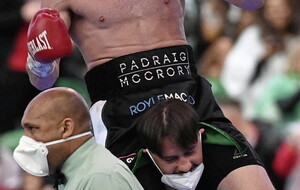 A WORLD title defence on St Patrick's weekend is the long-term goal for Pody McCrory but Belfast's IBO light-heavyweight champion has to come through next month's test unscathed before he can set his sights on it.

As ever, McCrory will be essential viewing on the undercard of Michael Conlan versus Karim Guerfi at the SSE Arena on December 10 and ‘the Hammer' intends to sign off on his superb 2022 in style. Having stretched his run of stoppages to four with a career-best win against experienced Marco Antonio Periban in August, McCrory rubberstamped his credentials and class by dominating defending champion Leon Bunn to win the world title in Germany last month.

After that fifth early finish on-the-trot, he took just a week off before he returned to Dee Walsh's busy gym to help stablemates Colm Murphy, Owen O'Neill and Conor Quinn prepare for their fights (all three won) on October 19.

McCrory's title win has made him a target in the division and he is focussed on continuing his rich vein of form.

“It's a coming-home fight but you take nothing for granted in boxing. One shot can finish a fight so I'm fully focussed but the plan on paper at the minute is to gear towards a world title defence on St Patrick's Day.”

McCrory's rise to world title level is a remarkable rags-to-riches story for a man who didn't fight as a professional until he reached an age when many boxers are thinking about retirement.

“I was late starting and I was grinding away on small hall shows and I took my opportunities but now I'm here and the names getting put to me for future fights – world champions/ex-world champions - are people who I used to sit and watch on the big screen and I never thought I'd get near to fighting them.

“I have loads of options and I want to get a winnable fight but the biggest fight possible and I'm punching hard enough to challenge any one of them.

“I went to Germany as the underdog and knocked out their boy so that shows I can punch and that I can fight at light-heavyweight.”

FEARGHUS Quinn's early career momentum was disrupted by injury problems and the Armagh fighter was out of the ring for a frustrating year before he returned in August with the fourth win of his pro career.

The hard-hitting former Orchard county Gaelic Footballer is determined to make up for lost time when he challenges Limerick battler Graham McCormack (8-1) for the BUI Celtic middleweight title on December 10.

McCormack won the title with a points victory against Cavan's Dominic Donegan at the Europa Hotel in June and Quinn, from the village of Belleeks in south Armagh, is well aware that he will have to rip the belt out of ‘G-Train's' hands at the SSE Arena.

“The last 18 months have been riddled with injuries but, thanks be to God, they've cleared up and surgery has went well on them,” he said.

“They're not giving me any bother and long may that can continue so I can get some good momentum over the next year and make up for lost time.”

Superbly fit, Quinn's workrate never slackened in his early professional outings and, although he has just one stoppage win on his record, more will follow if he is able to get that momentum he needs.

Challenging McCormack in an all-Irish title battle in his fifth fight is a risk but it could be the fight that kick-starts the 26-year-old's career.

“McCormack is the champion so I know I have to go in at my best,” he said.

“Sometimes fighting journeymen it's hard to get up for it because you know you should be coming through the fight no bother whereas this is a step up for me. I've never been over six rounds (the Irish title is scheduled for 10) and my last fight was a four-rounder so I haven't gone this distance.

“But that's what I want. When I was talking to Jamie (Conlan) I said I wasn't getting any younger and I wanted to start testing myself and I think this is a good way to do that and I can't wait for it.”

‘G-Train' McCormack has been around the block a few times. In interviews he has spoken of how he was told from childhood that: “He'd never be nottin' but a criminal” by teachers, police and the judiciary. He has spent time in jail but turned his life around and is determined to push on in his career.

“I'm a Celtic champion and I'm about to fight on a card that'll be shown on TV all over the world… That's unbelievable,” he added.

“It shows me that everything that I set out to do I've done but I'm going to do so much more and this (fight with Quinn) is where I'm gonna show that.”

The 35-year-old from the Treaty county took a long, hard road to get to Celtic title and Quinn faces the battle of his short career to take the belt from him.

“He's more experienced than me and I know he's tough and I know the back story behind him in his personal life,” said the Queen's University graduate.

“I know he's going to be coming well-prepared and well up for this fight especially given it's on such a big platform. I'm expecting the best of him and I've prepared to be the best I can be.

“We have similar styles – we're both come-forward southpaws – and I'm expecting it to be a good, exciting fight, so bring it on. I've prepared properly and training has been going great and I'm fully ready for it.”

Winning the first belt of his career would be the ideal way for ‘The Mighty Quinn' to sign off on 2022 and establish a platform to spring from next year. Quinn knows that but won't look any further than ‘G-Train'.

“It's a massive opportunity on such a big card,” he said.

“I've only had four fights so to win a title would be the kickstart to my career that I need after the bit of inactivity that I've had. If all goes to plan and I get the win it'll be a good boost to my career and it'll get me plenty of opportunities and hopefully a very bust 2023 when I can start kicking on up the levels to where I want to be.”