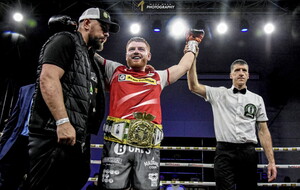 OWEN Duffy rang Owen O’Neill, the man who’d knocked him out so emphatically and brutally on Saturday night, yesterday to wish him well and thank him for a great fight.

Cavan native Duffy went into the last round of a barnstorming Celtic title battle ahead on points at Girdwood Community Hub in Belfast but O’Neill got the knockout he needed with a perfectly-timed right hook/left hook combination to win the title with a dramatic stoppage.

Both fighters had been roared on by partisan support in the arena but there was stunned silence around the ring when Duffy went crashing head-first to the canvas and lay motionless as medics scrambled to get into the ring.

He spent Saturday night in hospital but, thankfully, he was back on his feet yesterday.

“I got a scan done and everything is all clear,” he said.

“I remember the build-up to the shot he caught me with and the next thing I remember is being taken out of the ring on the stretcher... In the hospital they told me it was good news that I could remember that much detail.

“These things happen in boxing unfortunately.”

Distressing scenes in Belfast. Owen Duffy fought superbly but was knocked out by Owen O’Neill in the final round. Glad to see he is responding to medics in the ring. pic.twitter.com/SfWqlhDha0

The finish was alarming and distressing and brought back memories of Michael Conlan’s sickening knockout loss in March against Leigh Wood. Like Conlan, Duffy had his nose in front going into the final round and opinion varied over whether the margin of his lead with one round or three.

In the end that was a moot point. O’Neill’s coach Dee Walsh told his man that he needed a knockout in the last and the Belfast native, who was cheered on throughout by a large contingent from Cliftonville, came up with what he later said was “the best punch I ever threw”.

Duffy had gone into the fight with a knee injury but said he had “no excuses” and he went straight at O’Neill from the opening bell. The Irish rivals locked horns throughout the fight with both bulldozing forward but Duffy landing more effectively with his punches.

“I rang Owen and I said hats off to him and I was happy for him and thanks for a great fight,” said Duffy yesterday.

“That’s what you sign up for in boxing. I’ll let the knee heel and give the head the rest it needs and go from there.”

O’Neill was understandably delighted with his win but, with his opponent receiving medical attention, he was respectfully restrained on Saturday night. O’Neill, who moved to 10-0 with his first ever stoppage win, produced the goods when he really needed to and that should give him enormous confidence going forward.

“It’s a dream come true but I hope Owen Duffy is alright, that’s all I’m thinking about,” said O’Neill afterwards.

“It was a bad knockout and I hope he’s alright. Dee (Walsh) told me when I was going out for the last one that I needed a stoppage. That left hook… It was the best shot I’ve ever thrown in my life.

“I thought he would come out and box and I was going to be pressuring him but came out and he gave it to me and he wobbled me a couple of times definitely.”

In the headliner, Colm ‘Posh Boy’ Murphy came through a concerted challenge from Liam Gaynor to defend his Celtic featherweight title. Murphy moved to 6-0 with the win and he is steadily improving under Dee Walsh.

Gaynor – who had supporters up from Dublin and from his adopted Bolton – started slowly and then fought in spurts but Murphy’s workrate and accuracy was too much for him on night.

Meanwhile, at the National Stadium in Dublin, Brett McGinty was an impressive points win against Alessandro Ruggiero but there was disappointment for Cathy McAleer who lost her comeback fight. Referee David Irving had Vaida Masiokaite winning the bout on a 40-36 scoreline.