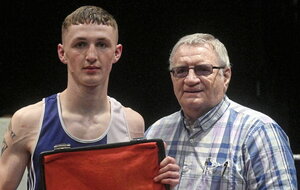 HE may be campaigning at one of the most competitive weights in Ireland, but talented teenager Donagh Keary is on his own journey and will bid to continue his momentum at the upcoming Irish senior championships.

With the likes of Galway’s Adam Hession, Commonwealth Games gold medallist Jude Gallagher and fellow Birmingham podium-topper Dylan Eagleson all expected to be in the mix for the 57kg spot at the 2024 Olympics, the country isn’t exactly short on featherweight talent.

They are already following in the footsteps of men like Kurt Walker and Michael Conlan as leading lights in the division, but the next crop – including Castlewellan man Keary – have the opportunity to shine at the National Stadium in the coming weeks.

The 18-year-old has received a bye into the next round after scheduled opponent Viali Florea was forced to withdraw. But he comes in off the back of an Ulster senior title success, having got the nod against Tiarnan Glennon (St Joseph’s, Derry) on a 4-1 split.

“He boxed very well,” said Bobby Lavery, Keary’s coach at Rathfriland Boxing Club, “especially considering it was the first time he had boxed without a headguard.

“He had never even sparred without a headguard… we were going to spar without it against Dylan Eagleson last week but it was too close to the championships so we didn’t take the risk and just kept the headguard on.

“Donagh’s an inside fighter, so he tried to keep him on the outside and not go in as much as he would like to. It just takes a wee while to get used to.

“Glennon has a few Irish titles behind him from his younger years, he’s a good operator. We knew he was very strong, so it was a step up for Donagh. It was a good fight for the neutral… for me it was nerve-wracking.”

Coming off the back of a disappointing defeat in August’s Irish U18 final, it was good to return to winning ways.

As a result of that win, Keary was called up to the Ulster High Performance unit last weekend, and he will be hoping to show the form that helped him capture top honours at the prestigious Haringey Cup in London during the summer.

But, with the Ulster elite championships on the horizon in December, Lavery – whose son Rory will represent Holy Family at the Irish senuiors - insists he has no intention of moving Keary too fast.

“We were disappointed not to win the U18s there, we genuinely did think we had done enough in the final but it wasn’t to be. Sometimes it’s hard to know what the judges are looking for down there.

“But Donagh doesn’t let it phase him. He knows you have to get on with it, bounce back and go again the next day. It’ll not be your last defeat, so keep working at what you think the mistakes are and take it from there.

“The likes of Jude, Dylan, they’ve shown their class at a very high level, but we’ll hang in there and learn from lads like that. I have to say Rory has helped Donagh a lot - he did a lot of work with him before the U18s up in Holy Family, then they went over to the Solly in Liverpool and trained there.

“He’s still learning and getting better so there’s no mad rush. Donagh’s been a breath of fresh air in our club, all the wee ones are actually coming on well because of him.

“We’ll see how he goes at these championships before we think about the elites or anything else. He has plenty of time.”

THE Irish Athletic Boxing Association insists it will adopt a zero tolerance approach to bullying and intimidation after admitting "unacceptable behaviours by some members of the boxing family" towards their staff in the past.

In a hard-hitting statement released by the IABA’s board of directors and central council, the Association said abusive behaviour has “no place in Irish boxing”.

“Such behaviour dishonours our sport and will be treated with zero tolerance.

“Irish boxing has a long tradition of teaching boxers the importance of respectful behaviour in the ring. Respectful behaviour outside the ring should be a cornerstone of our sport, and be part of all of our interactions with one another.

“The BoD and central council are aware of unacceptable behaviours by some members of the boxing family towards staff of the Irish Athletic Boxing Association. This is deeply concerning from a staff wellbeing perspective, given that the IABA’s committed staff team work daily to serve the needs of our members and our sport.

“Neither the board of directors or the central council will accept any such behaviour from any member towards staff and will take appropriate and proportionate action in the event of such behaviour.

“The BoD and central council add that, furthermore, Irish Boxing will not permit these behaviours towards bout officials, officers and competition administrators. These members are giving of their own time to our sport and ensure that competitive boxing takes place in every county and province in Ireland, as well as at national level.

“They should be treated with courtesy and respect at all times.”

The statement also pointed to “a robust complaints and disciplinary procedure”, which was adopted in 2019 as the IABA bid to tackle the issue at county, provincial and national level.

“This includes the appointment of disciplinary and complaints officers by all boards and units.

“Each DCO is empowered to begin an investigation into incidents, including of bullying, intimidating or abusive behaviours if there are sufficient grounds to do so following initial assessment.

“This mechanism is available to any member who feels they are being subjected to inappropriate behaviour.”