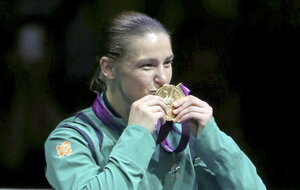 Billy Walsh pointed to the example of Katie Taylor in laying down a path for others to follow in the wake of her 2012 Olympic triumph. Picture by PA

FORMER Irish head coach Billy Walsh fears for the future of amateur boxing if the sport is no longer part of the Olympic Games.

In doing so, it is widely assumed that any hope of the sport securing a place on the programme for Los Angeles 2028 have been shattered – with the International Olympic Committee having previously expressed "grave concerns" over the IBA under Kremlev's leadership.

And he fears this latest development could cause irreparable damage to the sport.

“It is very scary,” said Walsh.

“The Olympic Games has always been the Holy Grail for boxers. I was 16 when Hughie Russell won his bronze medal in Moscow, and it’s really around those times you start to think… I was an apprentice fitter at the time, and I remember the boss man came around the factory floor one day and he said to me ‘why aren’t you at the Olympics?’

“He didn’t know I was too young, but that moment hit me. It was the first time I really thought ‘why can’t I go to the Olympics?’ From then on I pursued that dream, and eight years later I got there. The Olympic Games has been a huge part of my life ever since.

“Those moments, that’s what inspires kids to go to clubs, to want to start boxing. Look at Katie Taylor – she inspired thousands of girls around the country and further afield. Even here in America, you ask a lot of them who’s their favourite boxer and it’s Katie Taylor.

“She was the flagbearer for years, but without that, how many of those girls may not go into boxing gyms?

“It’s very frustrating because, at the end of the day, it’s young boxers around the world who are suffering because of the inadequacy of the people above them.”