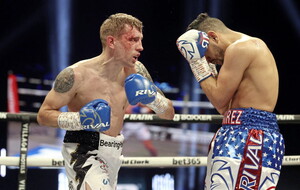 ANTHONY Cacace has rocketed from the supporting cast to centre-stage after the performance of his career on Saturday night and now there is a real possibility he could face England's Zelfa Barrett for either the WBC or WBO super-featherweight title in December.

That will depend on whether the heavyweight ‘Battle of Britain' between Tyson Fury and Anthony Joshua goes ahead on December 3. If it does, then Cacace-Barrett could be the chief support on the night.

It's all speculation, but what is absolutely certain is that Cacace leapfrogged up the super-featherweight rankings after he beat Michael Magnesi to win the IBO title in Manchester.

One judge scored the fight in Magnesi's favour but Cacace was the clear winner – and rightly so – on the other two cards and, in a perfect-storm scenario, doors opened to the WBC and WBO titles after Shakur Stevenson was stripped of both belts.

The American star was due to defend his belts against Robson Conceicao, but weighed in at 131.6lb while the Brazilian challenger was inside the 130lb limit at 129.6lb.

Cacace has a week to decide whether he intends to defend his British title or move into the world title theatre. At the age of 33, he will surely decide to make hay while the sun shines and kick on to an unexpected Indian summer.

“He's fresh at 33 and he's training now like he never has before. He's down training with Ian (Mahood) in Carrickfergus and he's sparring in Holy Trinity. He has two years and he wants the big fights.

“Fighting for the British title is brilliant but he's been there and done it, he's higher than that now, he's at world level and he's ready to move on and fight any of the top guys.”

Cacace is signed with Frank Warren's Queensbury Promotions while Zelfa Barrett is a Matchroom fighter and, although it would be a quick turnaround, the ideal scenario would be for Fury-Joshua to be confirmed and for Cacace-Barrett to be made chief support for one of the now vacant world title belts.

“Cacace versus Barrett for one of the vacant titles would be ideal,” said Hawkins.

“It's down to Frank Warren to push on for him. Barrett is big and strong but so is Anto so it's definitely a winnable fight for him. Even the likes of (Oscar) Valdez… Anto would have a crack at any of them. He'll not turn anybody down at this stage of his career.

“If he got the chance to fight Barrett in December, he'd grab it with both hands.”

Donovan got away to a good start but the Frenchman was powerful on the inside and was able to slip Donovan's jab and looked sharp on the counters. Donovan took a standing count in the fourth when muscular El Hadri hammered him with a salvo of powerful shots.

‘Lilywhite Lightning' recovered in the fifth and sixth and the 10th is a contender for ‘round of the year' after both men planted their feet and threw everything they had at each other.

“I had to dig deep a few times but I did and I got the job done. It's an incredible feeling, incredible emotions and I'm very happy.”

The punch volume came from Donovan, while the power shots came from the Frenchman. Donovan, landed singles, doubles and combinations while El Hadri looked for big shots. He landed quite a few but was unable to force the knockout - although he came close several times.

“The 10th round was unbelievable,” said Donovan.

“He gave it everything and I kept coming back. In the 10th round I kind of broke his heart because in 11 and 12 he had nothing left. I won the 11th and in the 12th I just kept moving because I felt I was home-and-dry then. I got off to a good start, he put me down in round four and I took round five off because Packie (Pascal Collins) said: ‘Get your legs back'.

“He had a bit of success in round seven and eight but I took off in nine, matched him in 10 and won the 11th. I was staying ahead of him, even when he was having successful rounds, he wasn't following it up with another big round.

“I always got myself back in the fight and my conditioning and energy was superb because I'd never gone past eight rounds before and there I was doing 10 rounds in a title fight at 37 years of age!”

He puts his longevity down to hard work and dedication and, with the title belt around his waist now, he will have options to step up to bigger things - if he chooses to do so.

“I just put one foot in front of the other and try and do the next right thing,” he says.

“That's the principle I try and live of: I try and do the next right thing in my life and keep marching forward.”

Wife Laura is expecting their third child and she is due in a fortnight so Ireland's new champion will have his bruised hands full for a while. He says he won't make any decisions on his boxing future just yet.

“There are some very exciting prospects that can happen for me,” he said.

“We're going to embrace this time as European champion, enjoy these moments and bring the new baby into the world. I want to rest and reset although the baby will throw a spanner in the works of all of that!

“There are exciting possibilities in my boxing career but I have to put my wife first now because she's put me first for the last couple of months.”

Earlier, boos rang out after Conor Quinn was held to a disputed draw on his comeback against Darwin Martinez. Quinn dominated the first three of the four rounds but took his foot off the gas in final stanza and the referee scored it 39-39.

There was better news for Owen O'Neill who moved to 10-0 against Marek Laskowski. O'Neill came close to forcing the first stoppage win of his career.

"That is my best performance to date and I'm saying that after every fight, which is a good thing,” he said.

In the chief support, Tommy McCarthy scored the 20th win of his career as he boxed to a 78-74 points victory over the defensive Reinis Porozovs.

"I was trying so hard to get flowing, but he was rigid,” said McCarthy.

“At the end of the day, it's my 20th win so I move on. I don't want to fight that type of opposition anymore because it makes me look bad and I'd rather look good."