He is the latest inductee into the British Ex-Boxers' Association Hall of Fame after a lifetime's dedication to the sport. And, at 86, Gerry Storey tells Neil Loughran why he still gets a buzz from the fight game… 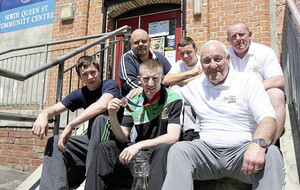 THE past few months haven’t been the easiest on Gerry Storey. A bout of psoriasis proved hard to shift, even the gentle beach breeze blowing by the family’s summer retreat in Ballyhornan offering little respite against discomfort.

For a man used to minutes, hours and days slipping by in the blink of an eye, it was an unfamiliar and unwelcome experience. Hustle and bustle, walking and talking boxing, this is the life to which he has become accustomed after 74 years in the game.

In recent weeks, thankfully, normal service has resumed. The Holy Family club has played host to its most famous custodian once more, while the resumption of academic activities has brought Storey back in harness with the Belfast Met boxing academy programme he helps oversee.

The last few days have added an extra pep to the step too after the legendary trainer was inducted into the British Ex-Boxers Association Hall of Fame, an already crammed mantelpiece back at his Belfast home requiring regular rejigging.

“Och aye,” he smiles, “it’s a nice honour. It’s always nice to get something like that.”

It’s even nicer, however, to be back doing what he does best.

Storey has received plenty of accolades throughout a coaching career that has seen him lead Irish Olympic teams in Munich (1972), Montreal (1976) and Moscow (1980), as well as working with a host of champions across the board at amateur and professional game.

In 2005 he became the first boxing recipient of the prestigious Laureus Sport for Good award, which was presented by former world champions Marvin Hagler and Barry McGuigan at a ceremony in Portugal.

But it is the small rewards rather than grand recognition which have always been his motivation. Storey turned 86 back in April yet last night he was at the club, talking kids through the fundamentals of boxing - always watching, prompting, pearls of wisdom at the tip of his tongue.

He first walked through the doors of the old Holy Family club in 1948 and it has been a part of him ever since. Gerry Storey hopes that will never change.

“I love working with kids and I love bringing them on to be champions at whatever level.

“A lot of that comes from Jimmy McStravick – he was the man who brought me to boxing in the first place. Jimmy saw me getting into fights in the street, one day he took me by the ear and gave me a bit of a lecture.

“My mother brought the four of us up on her own, my two sisters and my brother, because my dad went to England when I was a kid. So Jimmy was looking out for me.”

And it was after a lazy eye put paid to ambitions within the ring that a life outside the ropes began to take shape.

“It was actually the same eye complaint as Joe Frazier, and eventually Jimmy said ‘Gerry, you’re going to have to stop boxing because your mother’s breaking her heart every time’. She was worried something bad would happen.

“I was only 17 or 18, but he believed then that I had a gift for coaching, that I could read a fight, and he wanted me to give him a hand at the club. What a journey it’s been ever since.”

His work didn’t go unnoticed on the international stage either, with esteemed fight figures such as Angelo Dundee and Ray Arcel seeking his counsel on occasion, while lucrative offers were made to trade up and head Stateside.

The bidding never got beyond first base.

“Billy Conn and Fritzie Zivic, both former world champions, were two who were trying to coax me to come to America, but no way would I have left Ireland.

“I was involved in different things during the Troubles then, just trying to keep everybody together in whatever small way I could. I felt I was of more use here.”

Despite all that was going on in Belfast during the 1970s, Storey helped keep the international scene alive by bringing teams into Ireland.

After being invited to a meeting of the UVF army council, he agreed to help organise shows at the Loyalist Club on Rumford Street, off the Shankill Road, with parallel events in the nationalist Ardoyne area often taking place in the same week.

The trust placed in him from all sides is reflected in the relationship Storey has with his fighters too. Russell is reverential when he talks about his old master while Paddy Barnes’s father, Paddy senior, used to tell his son to “go down and see your real da” when Barnes would sacrifice family arrangements for a session with Storey.

And the fire still burns too. Awards and hall of fame entry are great, and deeply appreciated, but nothing beats the buzz of being at the Holy Family, behind closed doors, helping inspire the next generation of Olympic hopefuls.

“I always preach the Olympic dream to every kid that comes through the doors of the Holy Family, and that’ll never change. It’s still my dream too.

“I loved boxing from the start - I still love boxing, looking for mistakes, helping fix them, setting out tactics, studying opponents… God knows where I’d have ended up if Jimmy McStravick hadn’t got me into the club.

“This sport gets into your blood and once it does, it’s there for life.”

Seconds Out: McConnell hopes Paris Olympic bid will be worth the weight