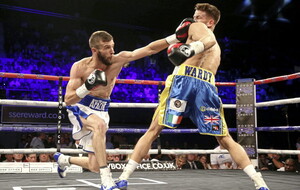 COCKY Italian Michael Magnesi is “in for a shock” on Saturday night when he takes on Anthony Cacace for the IBO super-featherweight title at Manchester Arena (live on BT Sport).

Defending champion Magnesi has boasted that Cacace will “not be a problem” for him the Belfast challenger is the reigning British champion at super-feather and travels across the Irish Sea with a 19-1 record. Cacace's pedigree is undoubted but – having fought just once in three years - will ring-rust be a factor against the bull from Lazio who is nearly seven years his junior?

“I've been around this game my whole life,” said Cacace.

“I haven't fought in over a year now, before that it was two years so it's one fight in three years but I still feel like I have it. Yeah, ring-rust might play a wee bit of an issue but I don't think it'll be much of an issue.

“Magnesi thinks he's going to do me in in one round.

“It's nice (for him) to be confident but that's just not going to happen. He's taken a look at my record and he thinks: ‘Cacace is nearly 34, he can't punch, what does he bring to the table?' I would look at a record like mine like that too but he's going to find out on Saturday night that I can punch and that I feel like I'm a spring chicken.

“He's in for a shock. When I land my first punch he'll re-evaluate the whole situation.”

Magnesi is four inches smaller than Cacace but he makes up for his lack of height by burrowing in close and blasting away with a relentless workrate. Cacace has the skills, and the power, to keep him at bay.

“I have to make the weight right and re-hydrate right and I'll be happy. If I perform the way I can perform here against this dude I think I can beat him and beat him handy too.

“I'm fit, I've had a seven-week camp and I'm as fit as I was for the (Sam) Bowen fight. I will definitely be on par with the fittest I've ever been so I'm looking forward to getting in.

“I'm going over with no nerves; I just feel I have nothing to lose – all I have to do is perform and I'll be happy in myself. I'm extremely confident I can beat this guy, I've fought guys like him my whole life.

“But it's boxing – anything can happen when the gloves are on. I'm very real when I talk about boxing. I don't like to be cocky, I don't like to trash-talk but I wouldn't be going over if I wasn't confident.”

Beating Bowen almost three years ago earned him the British title and Cacace has since defended the belt with a decision victory over Leon Woodstock last year. He spent a disastrous spell early in his career fighting in the USA and then linked up with the McGuigan family's Cyclone Promotions. The highlight of that chapter was winning the Celtic title and since then his struggles with inactivity have been well-documented and he admits: “I thought this would never come”.

“I thought I would defend the British title but I didn't think I would get an opportunity like this,” he said.

“But the way things happen is dead-funny and everything seems to be aligning and they've all made this fight more worthwhile.

Seconds Out: McConnell hopes Paris Olympic bid will be worth the weight