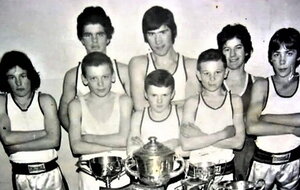 SUCCESS FROM THE START: Pictured at Holy Trinity during the 1970s are, back from left, Tony McCabe, Sam McCoy and Dennis Duffin. Front, from left, Damien Fryers, Thomas Dyer, Gerry Hawkins , Mark Rea and David Irving

HOLY Trinity’s 50th anniversary celebrations roll on with a three-part ‘Big Picture Show’ series, kicking off with rounds one and two at an open night at the club on Saturday night.

The series has been produced by club officials as “a tribute to the boxers, coaches, people and supporters who have combined down the years to make the Holy Trinity club such a success,” according to secretary and video editor Thomas Hawkins.

“One of the highlights of the event will be the publication for the first time ever of the full list of all our Ulster senior/elite title winners. It’s special.

“We’re celebrating 50 years at the heart of the Turf Lodge community so come along next weekend and take a trip down memory lane with us.

“Entry is free, with light refreshments provided so drop in and spend a relaxing hour or two with us reliving the history of the club.”

“The walls of our club already depict some of the highs and lows, the men and women behind the club down the years, and this ‘Big Picture Show’ series adds hundreds more to enjoy,” added club president and video editor Desi McPhillips.

“It’s a treasure trove of photos and videos, including coverage of when the famous Hollywood film star Daniel Day Lewis trained in our gym, learning boxing moves and skills for his film, 'The Boxer'.

“The ‘Big Picture Show round three will be screened later in the year along with a major boxing show, Q&A features with many of our leading boxers past and present and a gala 50th anniversary dinner evening to round off the golden anniversary celebrations.”

The series is produced by Holy Trinity Boxing Club in association with Belfast City Council and gets under way at the club’s Norglen Gardens gym on Saturday, doors open at 7pm.

Seconds Out: Cooke has the recipe for future success says Dee Walsh