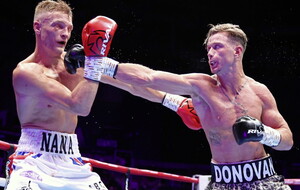 AFTER years of tireless and under-appreciated efforts building Irish boxing from the grassroots on the small hall circuit, Mark Dunlop's MHD Promotions have finally been rewarded with a live TV deal.

Irish language channel TG4 will screen the bill at the Europa Hotel, Belfast on Saturday 24 which will be headlined by Eric Donovan's EU Super-Featherweight title battle against Khalil El Hadri. Chief support on a typically all-action card will come from Lenadoon cruiserweight Tommy McCarthy.

“This is an incredible opportunity for me,” said Athy native Donovan.

“I'm delighted and excited about the prospect of making a dream come true. It means the world to me to have this fight on Irish soil where all of my family, friends and supporters can be there in person to make it an extra special occasion.

“It takes a team effort to make dreams come true and I can't the team involved enough. My manager Mark Dunlop, coach Pascal Collins and all the support team and sponsors, who without their help, this would not be possible.

“And míle buíochas do TG4, for broadcasting this event and giving the Irish public an opportunity to watch an entertaining night of professional boxing. I had one of my best nights as a fighter when I won the Irish Featherweight title back in March 2019, live on TG4. I hope we can top that with victory on the 24th of September.”

Next month's bill will be the fourth MHD show this year and will be presented by Micheál Ó Domhnaill who will be joined by a panel of expert analysts and commentators on the night.

“TG4 is delighted to partner up with MHD Promotions to bring our viewers this brilliant night of boxing live from Belfast,” said TG4's Head of Sport Rónán Ó Coisdealbha.

“We are proud to be able to bring Irish professional boxing to fans on a platform that is free-to-air in Ireland and across the world.”

Chief support and fan favourite Tommy McCarthy, the former European and WBC International Cruiserweight champion will return to Belfast for the first time in over three years. McCarthy intends to return to winning ways after a loss to Shane McGuigan-trained Chris Billam-Smith and promoter Dunlop intends to put together a stacked card with ‘Lilywhite Lightning' Donovan in the main event.

“Eric has been a tremendous ambassador to the sport of boxing in Ireland on both the amateur and professional codes,” said Dunlop.

“He has more than earned his right to be headlining on such a huge global platform as TG4, this is a real even match up and is sure to have the fans on the edge of their seats.”

PADDY Donovan is now targeting a shot at the WBC Youth welterweight title after he came through eight competitive rounds against obstinate Tom Hill at the SSE Arena last Saturday night.

Limerick's Donovan who went into the fight with six stoppage wins in eight but Hill was there for the long haul and Donovan could not shift him. The eight rounds will do the Andy Lee-trained Limerick native no harm at all as he looks ahead to a WBC World Youth title fight.

“Tom Hill came over from England and the English carry quite a heart,” he said.

“I knew he was going to be tough because he beat the number one ranked Irish welterweight Rohan Dates and dropped him twice in the fight.

“I knew I was going to hurt him, I knew I was going to box the way I boxed but obviously you have to go out and execute these things which is not easy with all the fans behind you because there's a lot of pressure to perform and I think I did that well. I listened to my coaches and got the win I wanted.

“That was the first eight-round fight and it's all a learning curve, I'm still learning my craft and I don't want to get ahead of myself.

“I'm just turned 23 so I have a long time left in this sport and I want to keep moving up the ladder one win at a time and, God willing, down the line I'll be world champion.”

That WBC Youth title (under 24) is next up for Donovan who will fight for it in Scotland on the undercard of Taylor-Catterall II or on the Joseph Parker-Joe Joyce (September 24) bill in Manchester.

Donovan had a large vocal support in the Arena cheering him on and he hopes to fight at Thomond Park, the home of Munster rugby, at some stage in the future.

“Thomond Park have big plans for us,” he said.

“I have the backing of the whole of Limerick and the whole of Ireland and I have my dad and Andy Lee in my corner and Top Rank behind me so it's up to me to keep performing and working hard in training and ticking all the boxes to be a superstar in Irish boxing.”

SEAN McComb went through the gears brilliantly against Ramiro Blanco last Saturday night. The Belfast technician warmed to his task as the rounds went by and gave an exhibition of stick-and-move boxing that left his bemused Nicaraguan opponent swinging at thin air in the second half of a one-sided contest.

“He was tough,” said McComb afterwards.

“I didn't want to get carried away. I enjoy a wee tear-up every now and again and I was doing it in spells towards the end when I knew he couldn't hurt me. I enjoyed it and I put on a masterclass of what was asked of me – it was like the amateur days: box, move your feet, feint…

“I need to keep them dizzy. I can't make them dizzy with my punches so I do it by spinning them in circles. I stayed in control, I kept my discipline, I knew where I wanted to be and I enjoyed the performance.”

McComb didn't get a live TV slot on Saturday night and for a man who has headlined shows in the past, that was difficult to accept and he'll hope to feature more prominently next time out.

“I belong higher up the card so I was disappointed to box so early. But I have to thank Conlan Boxing for giving me the opportunity, otherwise I'd be sitting in the gaff watching this on TV. You have to take what you're given but now I want to push on.”