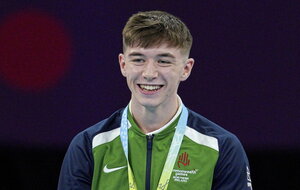 JUDE Gallagher admits he was “devastated” when Team NI coaches informed him his opponent had pulled out of the Commonwealth Games final.

Coaches told the 20-year-old yesterday morning that Ghana’s Joseph Commey had been unable to make the weight ahead of their 57kg decider, a double disappointment after semi-final opponent Keoma-Ali Al-Ahmadieh withdrew for the same reason two days earlier.

“They were devastated for me because I obviously wanted to fight on finals night… the atmosphere was unreal,” said Gallagher after last night’s medal ceremony.

“They were devastated for me and I was devastated, but there was nothing we could have done about it. I did everything on my behalf.”

It wasn’t the way he wanted to win gold, especially with so many supporters travelling over for the weekend. In a nice touch, though, Gallagher did get to walk into the ring in his vest and receive the applause of NEC Arena – the least he deserved after lighting up the venue earlier in the week.

His first round stoppage win over England’s Niall Farrell was one of the performances of the entire tournament, while he caught the eye on all three occasions he stepped between the ropes.

“There is a bigger picture,” said the 20-year-old.

“It has been a brilliant tournament for me. I had three very tough fights and performed very well in them. It’s unfortunate I didn’t get to perform in another two fights but it is a great start to my senior international career.”

With the Olympics in two years, Gallagher now has his sights set on Paris – news which may come as a disappointment to promoter Eddie Hearn, who was impressed with what he saw from the Tyrone man.

“Ever since I started boxing the Olympics has been a big dream of mine.

“It’s only around the corner but for now I’ll take some time off, reflect on the tournament and go again.”

The party is already getting started back home, with a huge banner draped across the front of the Castle Hotel - but Gallagher isn’t ready to assume the title of Newtownstewart’s most famous son just yet.

“Ah I don’t know,” he smiled, “maybe after Pascal McConnell.”