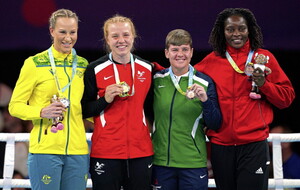 Having brought home silver from the Gold Coast four years ago, McNaul had her heart set on topping the podium in Birmingham. And she could hardly have done any more, boxing brilliantly and making every second of every round a nip and tuck affair against a top class operator.

Nikhat was just too good this time, but the 33-year-old already has Paris on her mind.

“I’m absolutely gutted that I didn’t get the gold but I want to keep going,” said McNaul, staring forlornly at the silver medal in her palm.

“She is just a really brilliant boxer. I went in and tried to keep small and move my head but she was better than me. I will come again… I’m not going to stop until I get what I want.

“A lot of people didn’t believe I could make 50 kilos but I went out there and did it and proved people wrong. That was a big enough fight and then to come here and put on the performances that I did, I am proud of myself.

“I had four really good fights and met the World champion in the final. I will go back and watch the fight, I’ll learn and I’ll get her again. I’ll meet her in the Olympics.”

Light-middleweight Eireann Nugent, meanwhile, brings home with bronze after losing out to eventual champion Rosie Eccles in her semi-final on Saturday.

But, having only returned to the ring after an 11-year exile, the Divis woman says her journey will continue.

“I’ll be back stronger,” she said.

“No-one has ever come back after 11 years out at 30 years of age, and to come back and jump into the deep end of an elite category like this, bouncing in with the best and walking home with a medal, I’m so proud of myself.