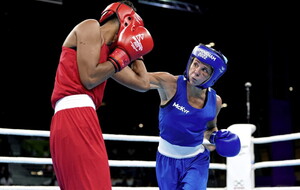 Having landed silver at the 2018 Commonwealth Games in the Gold Coast, Carly McNaul is determined to go one better this time around. Picture by PA

EUROPEAN champion Harris Akbar learned the hard way that you would struggle to hit Aidan Walsh with a handful of rice – but today’s semi-final opponent has vowed to make life way more uncomfortable for the west Belfast slickster.

Having successfully negotiated his way beyond Akbar on Thursday, Walsh will face Welshman Garan Croft in this afternoon’s light-middleweight semi-final as he bids to go all the way to gold having claimed silver in Australia four years ago.

But Croft – whose twin brother Ioan is in the mix for a welterweight final spot this evening – intends to put the pressure on the Olympic bronze medallist from the off.

“I’ll look forward to that, he’s a very experienced boy, but he’s got it all to lose. I’m going to go for it from the start and really prove a point,” said the 20-year-old.

“He’s very skilful, I’ve got to prepare for that. I’ve been in with similar opponents to him, but I know I’m going to have to really up my game for this one but I’m confident I can do it.

Many have gone in against Walsh with a similar plan, only to finish up wondering just where the nine minutes went after being forced to dance to his tune.

That’s why the 25-year-old is so relaxed. Having mastered that counter-punching style, Walsh doesn’t need to over-think the game.

And in terms of his ultra-professional approach to the sport, he is a guiding light for the younger members of the team who are beginning to make a name for themselves.

“I don’t want to tell anybody what to do, I don’t want to be like a teacher at school, I want to lead by example,” said Walsh on his role as joint team captain alongside Carly McNaul.

Unlike on Thursday, Aidan Walsh will be in the ring before Michaela today, with his bout taking place in the afternoon while his big sister takes on South Africa’s Phiwokuhle Mnguni this evening.

Flyweight Carly McNaul should prove too strong for Teddy Nakimuli, who is bizarrely guaranteed at least bronze despite not having boxed thus far – the Ugandan awarded a bye in the last 16 before her quarter-final opponent failed to make weight.

Big-hitting Amy Broadhurst looks to have too much for Nigeria’s Cynthia Ogunsemilore this afternoon, while Jude Gallagher will hope to carry his momentum into the weekend.

The 20-year-old has been one of the stars of the competition, impressing in all three fights thus far, and comes up against a familiar foe in today’s featherweight semi.

Canadian southpaw Keoma-Ali Al-Ahmadieh was in Jordanstown earlier this month for a pre-Commonwealths training camp, so the pair will have a good idea what to expect from each other.

“He’s a good kid,” said Al-Ahmadieh, “I respect him as a fighter, and we’re going to put on a show. We sparred, it was good work.

“Every spar, whether it’s with a newbie or the best in the world, you’re learning and getting sharper. But I’m ready for anything.”

ALTHOUGH son Michael bids to bounce back from his first professional defeat in Belfast tonight, John Conlan will be remaining with the Team NI boxers in Birmingham as they step up their medal chase.

Performance lead Conlan admitted it was “a really tough decision” to miss out on Michael’s big night at the SSE Arena but, with seven boxers between the ropes today and pushing hard for final spots, there was only one option on the table.

“It’s important that I’m here for this team - it’s a huge weekend for us,” he said.

“It was a really tough decision… I was hoping it was going to work out that I’d be able to get over then fly back the next day, but it’s crazy to have three sessions on the semis and then an early morning session on the Sunday – I told Michael I won’t get over.

“But, you know what, I raised all my kids to be independent. He doesn’t need me there, I’ll speak to him on the phone, I’ll watch him here. I spoke to him when I was in Tokyo [last August when Conlan fought TJ Doheny in Belfast], he was in Chicago, in Australia… it ain’t going to change whether I’m there or not.”