Amy Broadhurst plays down favourite tag ahead of final showdown 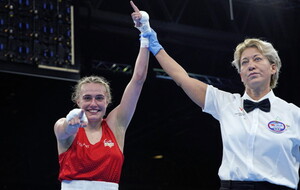 Gemma Richardson knows Amy Broadhurst well, with the pair having sparred at a training camp in Jordanstown last month. Picture by PA

AMY Broadhurst has moved a step topping the Commonwealth Games podium after plundering World Championship gold in May, but the Dundalk woman knows her biggest challenge will come in tomorrow's lightweight final.

Just as in her quarter-final, Broadhurst took some time to warm into yesterday's semi-final with Cynthia Ogunsemilore, before forcing her Nigerian opponent into standing counts in the second and third rounds on the way to victory.

England's Gemma Richardson – a World youth champion in 2018 – lies in wait tomorrow, and Broadhurst was quick to brush off the favourite tag as she counts down to that bout.

“I've known her a long time, she's been around as a junior and a youth, a very tough opponent but I'm going to get in and box to the best of my ability and that should be enough.

“I sparred her a couple of weeks ago in the camp [in Jordanstown], it was pretty scrappy. I'll listen to the coaches' tactics tomorrow and implement them - the rest will take care of itself.

“There is a bit of pressure but some of the favourites have been beaten so I don't listen to that. They said I was a red hot favourite the other day… that's not the case because my final will be tough. They are good opponents.

“People look at you and say ‘you are world champion, you are going to beat anybody easy' but that's not the case. It's one step at a time and the big one is on Sunday.”

And Broadhurst admitted her sluggish start to today's semi-final owed to weight wariness ahead of a possible decider.

“I probably didn't feel very good myself in the first round, the legs were dead and everything,” she said.

“I nearly had to be careful what I ate and drank today because obviously if I won I have to weigh-in again tomorrow, whereas the other day I probably came out of the ring at 62 kilos, and it's not really ideal for me going back to drop two kilos before a final.

“Tomorrow I can weigh-in and that's it then, I can get in at 65 kilos if I want to, not that that's going to happen.”

It will be a red hot atmosphere inside the NEC Arena tomorrow, with an English opponent in the opposition corner. But Broadhurst – whose father Tony is English – says the crowd will have no bearing.

“It will only make me want to prove them all wrong, and I have a big crowd with me too.

“I haven't had an issue with the crowd in any of the fights, they have been pretty fair to every country that has walked out, so I'll pay no heed to that.