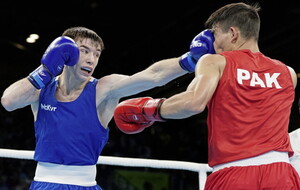 Tyrone's Jude Gallagher has been one of the stars of the Commonwealth Games boxing tournament in Birmingham. Picture by PA

THE ‘Magnificent Seven’ have the chance to write themselves into the history books this weekend – and after Team NI had to settle for a silver lining in the Gold Coast four years ago, only the big one will do in Birmingham.

Three gold and two silver came back from Delhi 12 years ago, followed by two gold, two silver and five bronze from the 2014 Commonwealth Games in Glasgow, before a haul of six silver medals and two bronze Down Under. The thirst for gold has returned, and this team has the potential to eclipse all of those.

Experienced operators like the Walsh siblings, Michaela and Aidan, Carly McNaul and Amy Broadhurst are joined in semi-final action by young guns Jude Gallagher and Dylan Eagleson on a bumper day for boxing at the NEC Arena, with comeback queen Eireann Nugent emerging as one of the stories of the Games.

The 30-year-old - who returned to the ring after an 11 year exile having been inspired by former foe Kellie Harrington’s Olympic gold medal triumph - sprung a huge upset when she powered past England’s Jodie Wilkinson.

Nugent is the first of the Team NI contingent between the ropes, with another tough test ahead this morning against experienced Welsh woman Rosie Eccles, who brought home silver from Australia four years ago.

“It’s going to be some scrap,” smiled Nugent moments after leaving the ring on Wednesday night, “it’ll be an absolute war.”

After just missing out on gold at the past two Games, Michaela Walsh will hope to make it third time lucky this weekend, beginning against South Africa’s Phiwokuhle Mnguni, with brother Aidan also well placed to go one better than the silver landed in 2018.

At 33, Carly McNaul is the oldest member of the boxing team. She came under the radar to claim silver last time – four years on, the east Belfast woman is a genuine gold medal contender.

Newly-crowned world champion Broadhurst looks destined for the top of the podium at lightweight while talented teenager Eagleson and, in particular, Tyrone’s Jude Gallagher have already demonstrated star quality on the way to the last four.

The challenge for them all now, insists head coach Damian Kennedy, is to take that final step.

“It’s a great achievement [to have seven in the semi-finals,” he said.

“We were very unlucky with Eugene McKeever, it could very easily have been eight, but we’ll go back, refocus, get the guys ready and push on from here.

“Coming here, defeating three English guys along the way, it gives them great confidence going into the semi-finals. They have a great morale now, they’re all buzzing, seven of them together making weight for the semi-final, they’re driving each other on.

“I said before we came here that we were going to shock – I think we’ve shocked them already.

But we’re not finished.

“Ask each and every one of them who are through to the semi-final what their dreams and aspirations are, and it’s a gold medal. There’s work to do yet, there’s tough opponents ahead in the semi-finals, but the target has always been gold medals.”