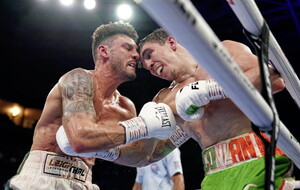 A FIGHTER can put one loss behind them but two defeats in-a-row is a different story.

So Michael Conlan is putting his world title hopes and dreams on the line against a battle-hardened Columbian in Miguel Marriaga who will keep coming at him at the SSE Arena tomorrow night.

Conlan has never lacked confidence but the manner of his loss to Leigh Wood in March – a brutal last round knockout that sent the exhausted and unconscious Belfast featherweight tumbling through the ropes like a rag doll – will have made a sizeable withdrawal from his bank of self-belief.

To balance the books and regain the ground he lost in Nottingham, he needs a clear victory against Marriaga who has previously jousted for world title belts with Vasyl Lomachenko, Oscar Valdez and Jamaican ‘Axe Man’ Nicholas Walters.

The five losses over his 35-fight career have all come against quality opposition and ‘Loma’ is the only man to have stopped 35-year-old Marriaga who arrived in Belfast confident and fit after a training camp in the high altitude of Mexico City.

Conlan knows exactly what is on the line. Looking tanned after spending a spell of his fight camp in Spain, the Olympic medallist says he wants to: “Get in there now and get the job done”.

“Marriaga is a tough, tough character,” he added.

“He’s only been stopped once, and that was by Lomachenko and he wasn’t even stopped, it was a ‘No Mas’ (no more) by his corner. I watched him shadow boxing and you can see how solid he is and how technically sound he is so I’m expecting a tough fight on Saturday night, I know it’s no easy touch.

“People were saying I could have taken someone else but I said to myself: ‘What’s the point?’ I want to get back into the title race as quickly as possible and I think beating someone like Miquel Marriaga makes a statement that I can do that.”

The old adage in sport is that ‘you win or you learn’ and Conlan insists that he has learned far more from his loss to Wood than he might have had the Englishman not recovered from being dropped heavily and hammered to the brink of defeat in the first two rounds.

Conlan’s coach Adam Booth says his fighter continues to improve in the gym and he expects him to display that progress on Saturday night.

“The last couple of years have been a steep progression in what Mick can do as a fighter,” said the Londoner at yesterday’s press conference.

“The things that we’ve been working on for such a long time are now coming out naturally and that was evident in his last fight when he showed something he hadn’t shown before and was 90 seconds away from achieving his dream.

“I still don’t think Mick has finished improving as a fighter and Saturday night is going to show that.”

Conlan says he “got drunk” on his own success against Wood and punched himself to a standstill.

He intends to box clever against Marriaga.

“I’ve had a lot of time to think and this is a fight where I can clean the slate and get back to where I need to be,” he said.

“There’s no need for me to get into any trouble or get into a war, I just need to get in and put a performance on and I’m planning on a dominant boxing win.

“The last time (against Wood) I think getting greedy on my own success was the problem. I was able to hit him so much and I kept doing it and that was my downfall. I suppose that’s where you learn, that’s the experience I never had before – I never had that 12-round experience where it was a war.

“It’s happened now and I learned the hard way by losing so it is what it is, the important thing is I learned.”