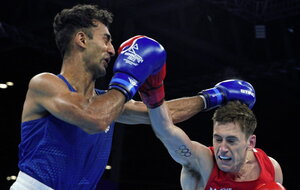 Aidan Walsh proved too quick and elusive for Harris Akbar at the NEC Arena yesterday. Picture by PA

IT was a case of ‘catch me if you can’ as Aidan Walsh moved another step closer to the top of the Commonwealth Games podium – and he insists defeat to an Englishman four years ago was not a motivating factor as the Olympic medallist saw off Harris Akbar yesterday.

Walsh was only 21 when he lost out to the experienced Pat McCormack in the 2018 Commonwealth final in Australia, but McCormack’s successor Akbar couldn’t get to grips with the Emerald counter-puncher’s elusive style.

In a bout that many considered the de facto light-middleweight final, Walsh took a split decision win in Birmingham to set up a last four showdown with Welshman Garon Croft, who was defeated by Akbar in May’s European Championship final.

But McCormack, and what happened Down Under, wasn’t near his thoughts coming into yesterday’s quarter-final.

“No, I’m just here to enjoy the experience,” said Walsh, whose sister Michaela has also booked her spot in tomorrow’s semi-final.

“That’s a European champion. I haven’t fought barely since the Olympics and I just want to enjoy the experience and the momentum and the bond.

“When you are in there it is just a normal fight. You do it in the gym numerous times per year and go to other people’s gyms numerous times a year. I’m just happy to be here and enjoy the experience - in a few years time I could be retired.

“Who knows what the journey holds?”

Akbar, meanwhile, felt he had been done enough to have his hand raised after a frustrating fight for the Bradford boxer.

“The kid just didn’t want to engage, from the get-go, just on his back foot, went for a 3k. I wish the kid the best in the rest of the tournament.”