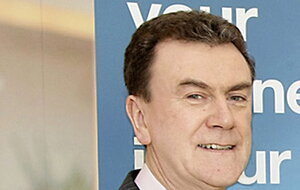 TYRONE secretary Dominic McCaughey has called on the GAA’s Rules Advisory Committee to urgently review the rule on ‘contributing to a melee’.

A couple of high profile incidents this year saw Red Hand players – including four in one game – sent off on straight red cards.

Conor McKenna was dismissed by Joe McQuillan in the Ulster Championship clash with Fermanagh at Brewster Park, while Kieran McGeary, Padraig Hampsey, Michael McKernan and Peter Harte all walked together after a brawl erupted in the closing stages of the Allianz Football League tie against Armagh at the Athletic Grounds. One Armagh player, Greg McCabe, was sent off by referee David Gough as he dealt with that incident.

McCaughey, who is to stand down at county convention after 35 years in the role, claims in his annual report that the rule cannot be properly applied, and leaves referees in an impossible position.

“The GAA’s rule relating to ‘contributing to a meleé’ is one which leaves a referee and his other match officials in an impossible position to make correct decisions, and since this rule cannot be applied in a proper manner, it should be reviewed, as a matter of urgency, by the Rules Advisory Committee,” he writes.

“Of course, first and foremost, meleés should not occur in any league or championship game, but, regrettably they do.”

“In one of the games referred to, one player from Tyrone was sent off for contributing to a meleé while it was apparent from the video-recording that there were nine players from the opposition associated with the meleé.

“And, in the second instance, when four Tyrone players, and one from the opponent’s team, were dismissed from the pitch for the same infraction, the match officials could have properly taken action, according to the rule, against over 20 players.

“An impossible situation for the referee to adjudicate on.”

And McCaughey contends that while the rule is flawed, referees are not always blameless.

“In all matches, mistakes and errors take place, and they are committed by all participants – the players, the managers and the match officials – but, in general, it is those of the referees that are highlighted by a team’s supporters, particularly those associated with the losing team,” he writes.

“Down through the years, one of the Association’s mantras has been ‘Give Respect, Get Respect’ and this has applied, and should always continue to apply, to our match officials.

“However, respect towards a referee or other match official diminishes greatly when blatantly wrong decisions are made on the field of play.”

The Tyrone official also hits out at the Gaelic Players Association over its protest in relation to unpaid and reduced player expenses.

“It was most disappointing to see the stance adopted by the body which claims to represent all county players in issuing suggestions of players threatening to take strike action,” he says.

“It is difficult to comprehend how players, participating in a voluntary capacity, could go on strike in order to be permitted to have a greater number of weekly training sessions with their expenses being paid.

“It has been argued that team managers arrange the training schedules and players are obliged to be in attendance on the field, or in the gym, with no consideration being given to the players’ general welfare.

“It seems absurd, however, that the players’ representative body cannot direct all its members to only participate in a schedule of training that is common for all players and in all 32 counties.

“If such a directive was issued to all players, there would be no option for non-compliance by any county team manager. Excess training sessions could not be called by managers, as no players would turn up.

“Of course most team managers advise that the training schedules are only put in place with the full agreement of their panel of players and that it is the players who are demanding the excessive number of training sessions in order to match what their colleagues in the other successful counties are doing.

“The players’ representative body should take a clear position on this issue.”