Paul McIntyre at the Aviva Stadium 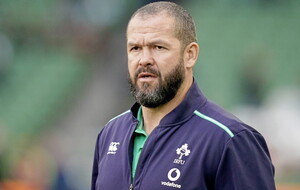 ULSTER players Nick Timoney and Robert Baloucoune were among the try scorers as Ireland saw off Fiji by 18 points on Saturday afternoon.

Timoney crossed the whitewash on two first half occasions when he found himself at the back of two Irish mauls while Baloucoune went over in the 25th minute.

Ulster had a healthy representation of six players with Stuart McCloskey and Kieran Treadwell also producing assured performances. But it was the display of Timoney that was most eye catching as the openside flanker added the Player of the Match gong to his two tries.

On Timoney’s recent progress head coach Andy Farrell said: “The way to sum up Nick is he’s very diligent in everything that he does in his work. He’s very serious about being as good as he possibly can be.

“He’s certainly trusted by the coaches, and for Ulster this year, his carrying game and contact stuff has certainly improved.

A slow start allowed Fiji to take an early 7-0 lead and the first 10 minutes were littered with penalties and handling errors as Ireland struggled for accuracy in their game.

Second half efforts from Mack Hansen and Cian Healy put some gloss on the final score but it was far from a good Irish performance.

Speaking afterwards, although delighted to have recorded another win, Farrell was far from pleased with how his team performed.

“Any Test match win should be celebrated, especially when you’ve got three lads making their debut and Tadhg (Furlong) captaining the side for the first time.

“So delighted that they are able to celebrate in the proper way with their families, etc. It’s such a momentous occasion for them,” said Farrell.

“But for us, as far as the performance is concerned, pretty underwhelming. I suppose when you look back and you analyse a performance like that, you’ll get plenty of learnings out of it.

“And I think that’s the moral of the story. We got into their 22 time and time again, and yes because of illegalities or the stop-start nature, we lost our flow, but we wasn’t clinical enough by any stretch of the imagination.”

It was situations like this that frustrated Farrell the most, particularly as Ireland enjoyed a numerical advantage for much of the contest.

“But for Fiji, being down to 13 men, obviously with the red card and a couple of yellow cards, and the penalty count being 14-10 in our favour, we should have been a lot more clinical than we was.

“The opportunities that we had in the 22 and not come away with more points and not putting the game to bed early was not like us.

“In reality because of that and how dangerous they are, the game was always in the balance for a long period.”

Farrell also confirmed that the early withdrawal of Robbie Henshaw was nothing more than precautionary, while both Joey Carbery and Jimmy O’Brien will follow the return to play protocols following their withdrawals to concussion.

Ireland enjoyed lengthy spells with ball in hand in the second half, but that lack of killer instinct was to prove to be their downfall time and time again.

The only highlight of the second period was a stunning 64th minute effort from the Fijians. Replacement scrum-half Simione Kuruvoli was on hand to put the finishing touches to a scintillating team move under the posts.

Ireland will now look for an improved performance against Australia on Saturday night as they aim to close out the series with a 100 per cent record.

Possession is king if Errigal are to gazump Glen

Possession is king if Errigal are to gazump Glen