In what was again a Titanic tussle between Quaid and his highly decorated Kilkenny counterpart Eoin Murphy, the Effin man gets the nod on this occasion. It’s hard to believe this is only the Limerick custodian’s second Allstar award, such has been his county’s dominance over the last five years. Quaid won his fourth All-Ireland and fifth Munster title this year. His diagonal delivery from a free just outside his own 22 helped to set up Gearoid Hegarty for the opening goal of the All-Ireland final after just 11 minutes, allowing the Treaty to gain a valuable foothold in their way to three in a row.

Has had a stellar year after recovering from a cruciate ligament injury in 2020. Ferocious work ethic, he smothered Cathal Mannion out of proceedings in the Leinster final win over Galway. Butler was the as most tenacious of man markers in the Championship this year. Tony Kelly’s anonymity in the Alll-Ireland semi-final owed much to Butler sticking to him like glue throughout. He rarely gave some the country’s top forwards a sniff all year and was frequently out in front and first to any long ball rained in on top of the Kilkenny full-back line. A first Allstar for the O’Loughlin’s Gaels man

A first Allstar for the O’Loughlin Gaels man, who is fast forming a resolute defensive partnership with his clubmate Butler. Enjoyed a couple of memorable tussles with Galway’s Conor Whelan in the Leinster Championship, including a bruising Salthill encounter which saw Lawlor sustain a suspected broken hand. He recovered in time to renew the rivalry in the Leinster final. Was also detailed to take care of Aaron Gillane in the All-Ireland final and came off better than most, restricting him to two points from play. Fast over ground, he is one of the quickest in the Kilkenny panel.

Nash has been a mainstay of the Limerick defense throughout their historic All-Ireland-winning run and picks up his third Allstar award. A promising underage half-forward, the South Liberties has been converted into a back by Limerick manager John Kiely and the Treaty fortunes have soared. Marked fellow Hurler of the Year nominee in the All-Ireland final and when it mattered most late on, was able to curtail the influence of the Ballyhale dangerman.

Only Aaron Gillane scored more in Championship hurling for Limerick this year. A tenacious and intelligent tackler, Byrnes is also devastating when he has posts in his sights. The half-back from Patrickswell picks up his third Allstar. An early point helped steady things in the All-Ireland final against Kilkenny and his 0-36 over seven Championship games works out at just over five points a game, which is an invaluable return from half-back.

Attacks win matches, defences win Championships and rarely is this more apt than with the Limerick captain. He lifted his fourth Liam MacCarthy Cup this year and this is his third Allstar award. Resolute and unnerving , he pounced on a wealth of breaking ball in the Treaty defence, holding back waves of attacks, not least in the early stages of the All-Ireland final win over Kilkenny as they sought to restrict a dangerous Cats forward line to scraps. The Adare man delights in mopping up dirty ball and transitions his team into attack with devastating speed.

A third Allstar for the Ahascragh-Fohenagh clubman. He further enhanced his reputation as one of the most ferocious defenders in the game with a series of standout performances. The two Titanic tussles with Kilkenny in the Leinster Championship brought the best out in him. Moved onto Eoin Cody during the win over Kilkenny in Salthill, he curtailed the Cats dangerman as the Tribesmen held out for a famous win. An ankle injury hampered him at times, but he was Galway’s most reliable defender all year and even chipped in with a few scores too.

Flitted between midfield and half-forward during Clare’s run to the Munster final and All-Ireland semi-final. A dependable fielder of the ball around the centre of the park with a good eye for the posts. He was good for a few points in each of the Banner’s Championship outings this year. It’s a first Allstar for the Inagh-Kilmona man who was a National League winner with Clare in his first year on the panel 2016 while still at University of Limerick, with whom he won a Fitzgibbon Cup in 2018.

A first Allstar for one of the Cats’ key attackers, named at midfield and enjoyed a couple of big hits with his Clare counterpart Fitzgerald in the All-Ireland semi-final, but frequently drifted into the half forward line to pick off some key scores. Enjoyed an effective partnership with his Ballyhale clubmate TJ Reid who, when not splitting the posts himself, was finding space and creating offloads for Mullen. Will be a key player for the Cats in the post-Cody era.

A third award for the St Patrick’s man and another who secured a fourth All-Ireland title this year. His sumptuous flick and finish to score the only goal of an epic Munster final against Clare was a standout moment and proved decisive as Limerick finally edged out their neighbours after extra-time. A man for the big occasion, he gave another masterclass in finishing, shrugging off Richie Reid to arrow an 11th minute goal in the All-Ireland final win over Kilkenny.

Might fly under the radar somewhat with the likes of Gillane and Hegarty around, but the fact that this is the Kildimo-Pallaskenry clubman’s third Allstar shows how vital he is to the Limerick forward unit. His goal in the drawn Munster SFC encounter with Clare proved vital and he chipped in with 0-4 in the All-Ireland final. A regular scorer, but even if he doesn’t always get his name on the scoresheet, his contribution to the scores of others is immeasurable. A great fielder and winner of dirty ball in the forward line.

A star of Clare’s 2013 All-Ireland win, it’s hard to believe the Ennis man has had to wait this long for his first Allstar award. His 2021 campaign was disrupted by the after effects of concussion and he was only able to return to the Clare set up earlier this year, but quickly became one of the team's attacking mainstays again. Was one of few Clare players to emerge from the tortuous All-Ireland semi-final defeat to Kilkenny was some credit, conjuring up some eye-catching scores.

Averaging just shy of 10 points a game throughout the Championship, Gillane was again Limerick’s top scorer as they secured a third All-Ireland title on the trot. It was a fourth title in five years for Patrickswell clubman Gillane and this is a third Allstar award for him. Scored three goals in helping Limerick secure their spot in the Munster final and to prove he’s another who rises to the occasion, plundered 0-10 in the provincial showpiece and 0-6 in the All-Ireland final win over Kilkenny.

It’s Allstar number six for the Ballyhale man. His 2-64 saw him top the Championship scoring charts for the second time after previously being top scorer in 2019. That included 0-12 in the Leinster final win over Galway, a game which ignited their All-Ireland ambitions after, by their own lofty standards, an indifferent provincial campaign. Was unplayable in the first half of the All-Ireland semi-final against Clare, helping the Cats oblierate the Banner challenge in the opening 35 minutes. He landed 0-10 that day, 0-7 from frees and was Kilkenny’s creative hub as the shell-shocked Munster men saw their hopes vanish.

That Clare went through 2022 without losing to Limerick in normal time owes a great deal to the mercurial Ballyea man. He whipped over 0-16 in their drawn round-robin game in the Munster Championship and sent the provincial final to extra-time with a levelling sideline cut in injury time. That 0-16 was the biggest return from a single player in this year’s senior Championship. Injury curtailed his influence at various times of the year and although he scooped the PWC Hurler of the Month award in June, that could not temper the disappointment of his team’s limp All-Ireland semi-final display against Kilkenny. It’s a fourth award for Kelly, which puts him level with Brian Lohan as the winner of the most hurling Allstars from the Banner county. 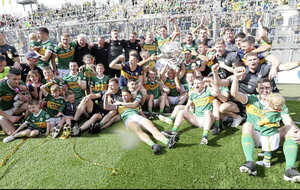 The Bast is yet to come from Giants insists defenceman Gabe

Clonduff firepower should see them shoot down