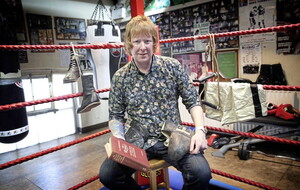 THE common ground. You don’t need to be dodging gloves inside north Belfast’s Holy Family boxing club for too long before you find it.

When Declan Murphy ambles into Gerry Storey’s comfort zone to a warm welcome on a cool Wednesday evening, the ties that bind are all around.

Kids from the New Lodge and kids from Tiger’s Bay are thudding bags, tagging shadows and skipping ropes on this night that’s in it. Two sides of the same coin blasting on.

The old place is as alive as any other night, a blurring whir of hope and effort, heart and sweat.

All here dream the same dreams – it’s how it’s always rolled in this haven, no matter what else once shook or fell outside its tight walls.

Gerry Storey and the Holy Family are, of course, a fabled chronicle in no need of blow-by-blow recaps.

Hamill, Nash, Russell, Larmour. McGuigan, Frampton, Burnett and Barnes. Creed irrelevant, they and plenty more brought their raw materials to the door, their stock-in-trade then honed beyond belief.

Storey’s rich gift as the driver for medals won, belts hung and dreams lived for decades and counting has been well inked in this newspaper and publications galore.

His own plaudits and awards, never sought or coveted, would fill a hall.

Declan Murphy, busy accountant and family man by day, songwriter and poet ó Murchú by night – “a bit like Bruce Wayne and Batman” he jests – is now bringing a touch of southpaw to the Family table.

The Co Down dab hand is, upon invite, in the New Lodge to let the man himself hear the songs he has written and recorded with the veteran trainer’s legacy as “a beacon of unity during the Troubles” at their essence.

‘The Cornerman’ offers a soft-focused yet stirring acoustic ballad where ‘every thrown glove, breeds the whitest dove, from the Lodge to the Rumford club’.

Its running mate – ‘The 9th Round’ – has its back. This one bobs and weaves with pulsing suspense as it zones in on a metaphoric bout – “symbolic of our peace process” says Murphy – where ‘to go the distance both must see, can mean as much as the victory’.

The songs, a collaboration polished with local musician Neil Kearney, and other fast hands in both Oh Yeah and Mojo recording studios, provide the first vines of a broader-scoped EP and – hopefully – a fuller album with complementary video.

A track on pioneering trade unionist and peacemaker May Blood, for instance, is another still bubbling.

For now, though, the boxing-fuelled one-two – released on all streaming platforms yesterday – will bear the flag for this pipelined collection.

High praise for Murphy’s initial poem that would soon morph into the lyric sheet for ‘The Cornerman’ dropped kindly early last year.

Donald McRae, the journalist and author whose book ‘In Sunshine Or In Shadow’ illuminates the revered trainer’s canon beyond compare, touched base on social media: ‘You’ve captured the great Gerry Storey, Declan’.

And while McRae’s compelling work itself provided a strong spur for Murphy’s songs’ intended message, you don’t have to scratch too deep either to find that his infectious passion for the sweet science wasn’t licked off the cobbles.

A meander into the back story of Brian Murphy – Declan’s father, a man of similar vintage to Storey – and it’s crystal clear where exactly the earliest seeds of inspiration were planted and sowed.

The cover art for the new single (inset) was evocatively captured by Irish News picture editor and Storey disciple Hugh Russell. Set against a well-trodden Holy Family canvas, the battle-stained relics of Brian’s own boxing past dare to speak vivid volumes.

It’s a narrative with a life of its own – one that the attentive Gerry Storey was only too happy to hear.

“Boxing was always going to be the obvious starting point for this project,” Murphy recounts.

‘My Da had fought for a brief period as a kid at the Holy Family club, we’re not sure he ever crossed paths with a young Gerry though.

“He played Gaelic football for Antrim minors as well. He came from Andersonstown and had been one of the founding members of the St Agnes’s GAA club before he then headed to New York in ’56 at 18 to stay with a couple of old aunts and an uncle from Belfast.

“He got more involved in the Gaelic, playing for Cavan when Kerry and them were the top dogs duking it out in their championship out there. But he was doing heavy oul’ work too, stoking fires and minding buildings and so on.

“He got tired of the work and being cooped up in the tight digs so, as an out, he volunteered for the army,just to go and have a new experience, I suppose.”

Brian’s two-year stint in the US Army was when the zeal for boxing would quickly take a tighter grip.

“He spent his time between America and West Germany at the same time Elvis Presley was also stationed there [in Frankfurt] and entertaining the troops.

“He made great connections, mainly with Italian-American guys, and fell deeper into the boxing. He won a few army tournaments before he came out of it around 1960 and then took up a good job as an advertising company supplies manager.

“Around that time he’d started training at the CYO (Catholic Youth Organisation) in West 17th Street under Pete Mello and Bobby Lewis. Sometimes Emile Griffith would have been preparing there too with his own trainer Gil Clancy.”

The chance to fight in the prized Golden Gloves national tournament slid onto the radar in ’60-’61.

Brian Murphy would win two preliminary bouts at the 147lb novice welter notch, making it into the quarter-finals at the Sunnyside Garden Arena in Queens. There, however, he lost out to the eventual champion Tennard Morrison.

The heady course may not have steered him into the pro game or to any grander stage, but that’s not to say Murphy didn’t lap up plenty along the way during what was boxing’s original golden age.

The hospitality wing in his day job often meant that ringside tickets to the Big Apple’s biggest fights – Madison Square Garden the norm – weren’t too difficult to score.

He never needed to be asked twice.

“The boxing tickets didn’t get taken up as much as other sports so my Da would pick them up. He’d have been sat next to the big celebrities.

“He was there for Sugar Ray Robinson’s fights in the Garden, Rubin ‘Hurricane’ Carter too.

“Benny ‘Kid’ Paret and Emile Griffith fought three times... the decider of their trilogy was the notorious one where Paret, who’d flung a homophobic taunt at Griffith at the weigh-in, died from injuries after taking a brutal beating in that fight.

“My Da was ringside at that one along with my mother, who was a Mayo woman. They’d met and married in New York, but that maybe wasn’t the best fight for her to be at.

“He also watched a young Joe Frazier fighting Oscar Bonavena in September of ’66 and saw Muhammad Ali’s fight with Zora Folley the following year (Ali’s last before his three-year suspension for refusing the draft). All of these experiences were really just something else.”

When the Murphys returned to the home sod with their two daughters in 1969 of all the years, a family man’s love for boxing would never wane throughout the Troubles’ dark days and nights.

Once Declan, now 43 years young, came along, that indelible passion proved to be genetic.

As the ’80s rolled into the ’90s, a father and young son would spend many a night at the Kings Hall watching the Dave ‘Boy’ McAuleys and the Ray Closes of their world thrilling fans from all corners.

Their own shared escape hatch offered hypnotic respite, if only fleeting, from deep lesions still being scorched no end across the lines on the outside...

Back at the Holy Family gym, an unpresuming Gerry Storey listens with a quiet curiosity to Declan Murphy’s delicately-crafted lyrics.

“I thought the songs maybe sparked a little bit of emotion for Gerry,” he ponders on reflection.

“There’s a line there in ‘The Cornerman’ that goes ‘He’ll bring you on a walk with the angels’ which was inspired by a key detail in Don McRae’s book about a thing Gerry’s own mother would have always uttered to him as a young child.

“He got me to leave my name and number on the songs’ lyrics sheet. I just sensed that he was genuinely pleased and even moved by that.”

The common ground can always be found should you seek it out.

It’s a Storey for one and all that ó Murchú hopes still has plenty left to run.

Drama in Down as 'Point edge absorbing shootout despite goalkeeper injury