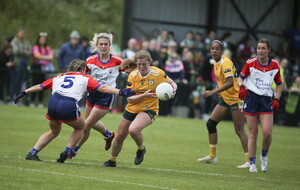 Anna Carr (Armagh)
Carr shone again this year as Ulster’s top goalkeeper. As the last line of the Orchard County defence, she stood firm as some of country’s top forwards bore down on goal. The Carrickcruppen player’s presence between the posts, a composed figure in times of great pressure, was crucial in helping her side to a third consecutive Ulster Senior Championship title this year.

Clodagh McCambridge (Armagh)
McCambridge has had yet another great year in the Armagh jersey and continues to be one of the best defenders about. She is one of the tightest one-to-one markers and has enjoyed some great bouts with top class forwards this year. A massive rock in the heart of Armagh’s defence, this is the second year in-a-row McCambridge has been named in on the Irish News Team of the Year.

A player who is feared by defences across Ireland and a previous winner of this award, The Irish News Ulster GAA All-Star Ladies' Footballer Player of the Year goes to @AimeeMackin from @ArmaghLGFA #INAllStars@shaneoneillsgfc @UlsterLadies pic.twitter.com/JKU8eAcMKU

Niamh Carr (Donegal)
A superb defender who puts in a lot of hard work to make sure her team keep the opposition at bay. She is a key player in the heart of the Donegal defence and is rewarded by being voted in at number three.

Aislinn McFarland (Antrim)
McFarland will do anything that is asked of her if it means she can help her team win. She can do a job anywhere between the midfield and the full-back lines and it is at corner-back that she gains recognition for her superb year that saw her collect both Ulster Junior and All-Ireland Junior titles.

Lauren McConville (Armagh)
McConville’s performances for the Ulster champions rightly earn her another place in this Team of the Year. As Armagh claimed a third successive provincial title, McConville played a major role thwarting opposition attacks but popping up at the other end of the field with some crucial scores for her own side.

Niamh Marley (Armagh)
Just like her team-mate McConville, Niamh Marley has been one of the vital links between defence and attack for Armagh this year. She is a defender that no forward enjoys coming up against known for her ferocious tackles. Her job is not done when the ball is gone she will go and support the attack and is not afraid to take her scores either.

Niamh McLaughlin (Donegal)
The Donegal captain was one of the outstanding players in the province, and beyond, this year. She took the challenge to opposition teams, driving forward into the heart of opposition defences. Her soccer skills saw her coolly and professionally despatch a number of penalties giving goalkeepers little to no chance. A super year for McLaughlin sees her rightly take her place in this team.

Blaithin Mackin (Armagh)
Mackin may now be Down Under in Australia plying her trade in the AFLW, but before she departed she showed how she will be able to transition her skills to the oval ball. Mackin has become a vital cog in the Armagh engine room, getting up and down the field displaying some fine point taking for the Orchard County this season.

Aine Tubridy (Antrim)
Tubridy showed just how good a player she is this year, helping Antrim to provincial and national championship honours. Her work-rate, her passion and her commitment is second to none and she drives on her team-mates all around her. She puts in a lot of unselfish work and that has not gone unnoticed as she takes a place in the centre of the field on this year’s team of the year.

Blaithin Bogue (Fermanagh)
Bogue was a dream to watch this year, standing out for the Erne County. She took on the role of play-maker for Fermanagh but she was equally as impressive when it came to getting on the scoresheet. Her season might not have ended with any silverware but who will forget her exhibition of point taking in the All-Ireland junior final drawn game - seven exquisite points all from play.

Niamh Hegarty (Donegal)
Hegarty’s driving runs gives Donegal an added dimension - she is not afraid to take on opposition players. An experienced player who gives her all for the jersey, her strength and determination mean she is hard to stop and is always an outlet for her team-mates.

Cathy Carey (Antrim)
The Antrim captain continues to roll back the years and is playing some of her best football which is recognised with her inclusion in this team’s half-forward line. Once again this year her experience helped the Saffrons to Ulster success before they went one step further this year and landed the All-Ireland Junior title with victory over Fermanagh. Carey received Player of the Match in the replay scoring 2-1 on the day.

Aimee Mackin (Armagh)
Mackin continued to torment opposition defences this year and her inclusion in this year’s team is no surprise and certainly merited. Her exhibition of point taking is breath-taking. A closely marked figure by oppositions she still manages to make her presence felt with hauls of 1-5 in the Ulster final and 20 points in the All-Ireland series not a bad return.

Geraldine McLaughlin (Donegal)
Consistently outstanding. There are no better words to describe the Donegal sharpshooter. McLaughlin can win a ball she has absolutely no right to, she can turn and shoot on a sixpence and with her around Donegal’s threat increases tenfold. She had another superb year for the Tir Chonaill girls including a 1-11 haul in the Ulster final, despite ending on the losing side. She also hit 19 points in the All-Ireland series.

Kelly Mallon (Armagh)
Armagh captain Mallon led by example this year as the Orchard County claimed that third Ulster senior crown on the trot. That final victory over Donegal, after extra-time, will be remembered for Mallon’s coolness as first she slotted over the late free to send the game to extra-time and then for her goal that grabbed victory from the jaws of defeat. Mallon’s accuracy from the dead ball is exceptional while her presence on the field, as a natural leader, gives everyone a lift.