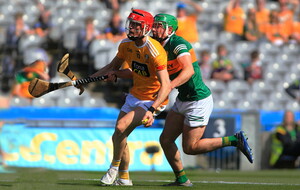 Ryan Elliott (Antrim)
There have been so many days in Ryan Elliott’s career where hes caught flies between the sticks for both club and county. The 24-year-old Dunloy man has been undisputed first choice for Antrim for the last four seasons and has improved year on year. His puck-out radar has reached a scandalous level of consistency, only matched by his brilliant reflexes. Without his heroics in the second half of last season’s Joe McDonagh final against Kerry, Antrim would have gone up the road empty-handed. His best season yet.

Paddy Burke (Antrim)
Antrim’s most reliable defensive trouble-shooter. The Cushendall man could play anywhere on the field and still be a seven or eight-out-of-10 every day. Rarely did we see Burke have a poor game in 2022 between League and Championship. When Antrim need to plug a hole in defence, he is always Darren Gleeson’s go-to man. A Joe McDonagh Player of the Season contender. Tough tackling and calm in possession, Burke stood strong against all the big guns that Antrim faced this year.

A legend on and off the pitch. It's over to this and the next generation of hurlers in Tyrone to live up to the high standards that he set.

John McManus (Down)
Still only 28, yet it feels as though McManus has been around forever at the heart of the Down defence. It is six years since the Ballygalget man was named on the Christy Ring Champions 15 select, and McManus has continued to go from strength to strength, adapting impressively to each new level as the Ardsmen have pushed up the National League and held their own in the Joe McDonagh Cup. A natural leader and a foundation stone of Down’s success this year.

Gerard Walsh (Antrim)
One of the county’s most gifted hurlers. Playing full-back in the modern game is a thankless task but Walsh thrived in a position that Antrim had trouble filling in recent seasons. Not only did the O’Donovan Rossa clubman blot out the opposition’s danger man, his long, raking puck-outs were a glowing feature of how Antrim went about their business in 2022. He’s the ultimate team player who is probably a more natural half-back, but Darren Gleeson will take some persuading to move him from the edge of the square.

Eoghan Campbell (Antrim)
No better reader of the game, no better distributor of the ball. So much flows from Eoghan Campbell’s cerebral hurl. Few would have begrudged the affable Cushendall man climbing the steps of Hogan to claim Antrim’s second Joe McDonagh title in three seasons. He can pass short or long and is the coolest man under pressure. Senses danger even before the opposition. No wonder Neil McManus insists he wouldn’t swap Campbell for any other number six in the country.

Conor Woods (Down)
During the good days and the bad, Conor Woods has been a class act throughout his 14 years wearing red and black. A superb reader of the game, the Ballycran man remains calmness personified no matter the occasion, and is the lynchpin of a successful Down side. Made a major contribution as the Ardsmen just missed out on a Division One spot, and came off the bench to superb effect late on in Down’s final game – helping them across the line against Meath, securing their status in the Joe McDonagh Cup.

Chris Kearns (Tyrone)
The Dunloy native has been hurling for the Red Hands for five seasons now and his versatility and all-round ability again proved invaluable to his adopted county. Started the National League in midfield and can also operate at full back, but mostly played in the half-back line this year. Solid defensively, he’s also a regular scorer, notching 0-11 over a dozen outings, including contribution against both Donegal and Roscommon, in the Nickey Rackard Cup round five – effectively a semi-final - and Final.

Keelan Molloy (Antrim)
Molloy’s blistering pace and ability to find space in the most congested areas makes him a thorn in the side for any county he comes up against. The dynamic Dunloy midfielder stepped up when Antrim needed him most, bagging 1-2 in their Division One relegation play-off against Offaly. Molloy continued to demonstrate his class on the way to another Joe McDonagh Cup triumph, and led the charge with a brilliant first half showing when Cork came to Corrigan Park for an All- Ireland Championship clash in June.

Joe Maskey (Antrim)
With Antrim beset by injuries heading into their huge Division One relegation play-off against Offaly, Maskey was moved from his traditional left wing-back berth into midfield – and the St Enda’s man looks to have found a new home. Brilliant in that game as the Saffrons retained their top flight status, Darren Gleeson kept Maskey in the middle where he formed an impressive partnership with Keelan Molloy as Antrim went on to land the Joe McDonagh Cup for the second time in three years.

James McNaughton (Antrim)
Injury threatened to wreck his season but once he got a clear run, the Loughgiel Shamrocks man was sublime in Antrim colours in 2022. Even when they suffered a League defeat to Laois, McNaughton was the only attacker still penetrating their back-line. He was the game-changer in the play-off win over Offaly and showed that he is among the best half-forwards in the country after hitting 1-9 against Cork at Corrigan Park. McNaughton is elemental to the Antrim attack.

Damian Casey (Tyrone)
The Dungannon man was long assured of legendary status for the Tyrone hurlers but it was fitting that his last performance for the Red Hands was to lead them to victory in Croke Park. He exceeded his amazing career average of 10 points per game with 0-14 in that Nickey Rackard Cup decider against Roscommon, having gone one better with 1-12 against Donegal to seal the final place. The 28-year-old’s career tally was an astonishing 39- 908, scoring in every one of his 101 consecutive senior appearances.

Neil McManus (Antrim)
The experienced Cushendall man played a huge part in Antrim’s Division 1B displays, notching 4-29 overall in four matches, comprising 0-13 against Waterford, 2-7 against Dublin, 1-7 against Laois, and 1-2 away to Kilkenny. Injury ruled him out against Tipperary and the early stages of the Championship, but he returned to score 1-0 in the vital Joe McDonagh Cup group stage victory against recent big rivals Carlow, and 1-2 then 0-2 in the two matches against Kerry.

Ciaran Clarke (Antrim)
The Ballycastle man was a slow burner in the league, with just 1-5 scored, his goal coming against Waterford. However, he really came to life in the Joe McDonagh Cup, demonstrating his eye for the nets, registering 4-8 in four matches. Having hit 2-1 in the derby rout of Down, he saved his best for last with 2-2 in the final against Kerry. After netting an early goal – and assisting the second for James McNaughton – he goaled again on the hour mark to help hold off a Kingdom rally.

Daithí Sands (Down)
There’s more than a touch of his famous father Noel in the way Sands plays the game. The Portaferry ace may not be the biggest, but he will gleefully go toe-to-toe with any opponent, and continues to show that he can more than hold his own in elite company. Sands ran himself into the ground every time he crossed the white line and, with his pace and ability to turn on a sixpence, carried a constant threat as Down took their game  to new levels this year.

Conal Cunning (Antrim)
The 24-year-old really stepped up when McManus was unavailable, top-scoring for the Saffrons in all five of the Joe McDonagh Cup matches he played in, tallying 2-55 to finish third on the overall scoring list. His total included 2-11 from play, with goals crucial to the narrow wins over Offaly and Kerry in the Final. His placed ball accuracy was extremely reliable, adding four ‘65s’ to the 40 frees he converted. He also contributed 0-11 in the League relegation play-off win over Offaly.