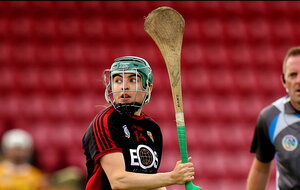 Áine Graham (Antrim II)
Her sister Catriona is Number One for Antrim seniors and was on the Irish News Team of the year last season. Younger sibling Áine is cut from the same cloth. Her heroics in Croke Park with Antrim juniors resulted in her eighth clean sheet in the 12-match programme for this ‘new’ Antrim team. Cavan were the only team to get two shots past the Ahoghill girl who plays outfield for her club team. A good shot-stopper with a long strike, Áine is confident coming off her line and is pushing her sister for the top job.

Niamh Donnelly (Antrim)
Niamh has made it into all three Irish News All-Star teams to date and is another player to change her name during an eventful year that also saw her coach her St Killian’s College school teams to three Ulster titles and the U16 All-Ireland title. The tall full-back has played for Antrim for more than a decade covering every position in defence and midfield. Quick on her feet, with a huge strike that usually puts her half-forwards on the attack.

With eye-catching displays in both the league and championship. The Irish News Ulster GAA All-Star Camogie Player of the Year goes to @Roisin38346656@antrimcamogie #INAllStars@lgielcamogie @UlsterCamogie pic.twitter.com/cTVNO6BKsJ

Chloe Drain (Antrim)
Made the switch from full-back to the corner last during the intermediate championship run last year and has remained there since. The Dunloy player attacks from the front, forcing her opponent to mark her rather than the other way round. She usually picks up the speedier of the corner-forwards and rarely is beaten to the ball.

Megan Kerr (Derry)
Best known as a midfielder, Megan was surprisingly selected as a one-on-one marker for Derry’s Ulster semi-final with Down. After her success in holding Niamh Mallon to a single point that day, Megan became the cornerstone of the Derry defence as they progressed to come within a point of an All-Ireland final appearance. A winner at midfield with Eoghan Rua Coleraine in the All-Ireland club final in March, Megan sustained a cruciate injury playing football for Trillick and was unavailable for Coleraine’s return to the Derry senior championship campaign in the latter part of the season.

Caoimhe Conlon (Antrim)
Another player who is winning her second Irish News All-Star, Caoimhe has made the Saffrons’ centre-half back jersey her own over the past two seasons. The Dunloy physiotherapist reads the game well and always picks out the simple pass to a better-placed colleague. She also has growing professional demands on her time and, once Antrim was knocked out of the championship, she linked up as physio with the juniors to return to Croke Park.

Colleen Patterson (Antrim)
The Ruairí Óg Cushendall star is winning her first award. Two years ago she was battling her way back into the team after a cruciate injury kept her out of action for a season and a half. Last year she re-established herself in the Antrim defence for the All-Ireland run. This season her all-action displays in the All-Ireland senior championship has made her team competitive at the top level. Another player who has given over a decade to the Antrim cause.

Dearbhla Magee (Down)
As the Down team has changed over the past two years, so too has Dearbhla Magee’s role within it. She now finds herself at centre-half back. The Liatroim Fontenoys midfielder and Aquinas Grammar PE teacher was an underage national cross country runner and she uses her pace to break through the middle and make and take scores. This is her third Irish News All-Star

Lucia McNaughton (Antrim)
Last year’s winning All-Ireland captain is the consummate team-player adapting to new roles as Antrim works to become a force at senior level. Despite being one of the best score-takers bursting forward, she has developed a more defensive midfield role to protect her half-back line. Her awareness of space and ability to predict movements of opponents have seen her gain and hold a lot of possession before delivering to the runners inside. A second award for the Loughgiel midfielder.

Leanne Donnelly (Armagh)
Often overshadowed by the excellent scoring returns of her sister Ciara who has made the last two Irish News teams of the year, the younger Donnelly sibling has always been a key member of the team since making her senior county debut as a 16 year old. Over the past few seasons the combative midfielder has burst through for many key scores and only her sister has a better scoring return. She fulfils a similar role with her club side Eglish whom she helped to the Ulster intermediate title last December after an absence of three seasons.

Róisín McCormick (Antrim)
Another player who made her senior county debut while still in her first season of minor camogie, Róisín took over as the leader of the Antrim attack this season in the absence of injured friend Maeve Kelly. Her performances all season have made Antrim competitive at the top level, but the first half of the league semi-final against Cork was simply breathtaking: two goals and seven points. She also fired 3-5 as Antrim beat Down in the Ulster final, the Saffrons’ first title in six seasons.

Áine McAllister (Derry)
The Ballinascreen dual-player has been the mainstay of Derry teams for over a decade now, and the move from midfield to half forward this season has helped both the player and her team. Her accuracy from frees and from open play were key to giving a hesitant Derry side a foothold in games and she often needed to drop back into midfield to close games down. The team’s top-scorer in league and championship.

Aimee McAleenan (Down)
With more senior players unavailable this season, the Liatroim Fontenoys forward took over the captaincy of the county team who had to face, among other top teams, Galway the 2021 All-Ireland champions in both league and championship. She led by example with her performances more about winning and holding possession in the Down forward line than accumulating a series of spectacular scores. An unselfish player she has stood up to the plate to allow younger players find their feet in a team going through a rebuilding phase.

Caitrin Dobbin (Antrim)
Another skilful product of the Loughgiel underage structure, Caitrin Dobbin sprung into prominence in last year’s All-Ireland run after which she was voted into the Irish News All-Star team. There was less space for her in the forward line at senior level, but her pace took her clear of the cover and she finished with some spectacular goals, the strikes against Kilkenny and Offaly remaining in the memory long after the inter-county season has ended. The Ulster dancing champion continues to produce the goods as Loughgiel strive for a ninth county title in a row.

Niamh Mallon (Down)
Only superlatives are used in describing Niamh Mallon on a camogie pitch. The 2020 Irish News Player of the Year turned in another excellent year after helping her club Portaferry to initial Down and Ulster club titles with all their scores in the Down final and 0-11 out 1-13 in the provincial decider. She returned to the Down team for the Offaly game and scored 2-4 to secure Division One status and then hit 1-32 in the five championship games, the three points again against Offaly despite a severely injured shoulder kept Down in the senior grade. In a club championship game earlier this month she scored 1-19. A genuine scoring machine.

Dervla Cosgrove (Antrim II)
The Ruairí Óg forward lit up Croke Park on her debut in August with a first half hat-trick of goals inside 84 seconds on the way to scoring a total of 4-2 and winning the Player of the Match award. She also claimed a first half hat-trick in Antrim’s opening game of the championship against Roscommon and scored 1-9 against Armagh in a group game. Her scoring returns were one of the main reasons the Antrim junior team made it up the steps of the Hogan Stand.