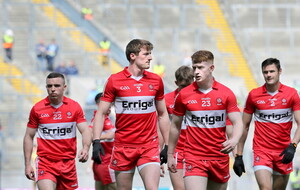 Ethan Rafferty (Armagh)
The role of the goalkeeper continues to evolve year on year and Armagh’s Ethan Rafferty brought it to a different level this season. The Grange man gave a new dimension to the term ‘sweeper keeper’ with his forays up the field and his two points against Tyrone are the standout moments of the campaign. Rafferty didn’t have the best of starts to his time between the sticks against Donegal but grew into the role impressively and made massive contributions against Tyrone, Donegal (qualifiers) and Galway.

Brendan Rogers (Derry)
His Ulster final display alone justifies Rogers’s inclusion in the Team of the Year. A rock at the back for Derry all season long but showed his versatility and footballing ability when he skipped forward for three points in the Ulster decider while also moving to midfield in the quarter final against Clare. Rogers had a tough day at the office against Damien Comer in the All-Ireland semi-final but made a blistering start to the game, hitting 0-2 to put Rory Gallagher’s side in control early on.

Chrissy McKaigue (Derry)
Captain fantastic and the man for the big occasion. If there’s a job needs done in the Derry defence, McKaigue is usually the one handed the task of stopping the oppositions main man and nine times out of ten he comes up trumps. The Slaughtneil clubman held Darren McCurry, Jack McCarron, Paddy McBrearty, Keelan Sexton and Robert Finnerty to a combined total of 0-3 from play in his five Championship outings and became the first Derry man in 24 years to get his hands on the Anglo Celt.

Conor McCluskey (Derry)
One of the unsung heroes of this Derry team, McCluskey made a major impact on their successful campaign. The Magherafelt defender picked up some key man-marking duties throughout the summer, none more so than Conor McManus and Shane Walsh. Walsh’s performance in the All-Ireland final against Kerry furthered McCluskey’s reputation as he held Galway’s attacking ace scoreless from play in their last four meeting. He also got up the field against Clare to raise a white flag in the quarter final.

Jarlath Óg Burns (Armagh)
His move to wing half-back worked wonders for Armagh this season and he brought brilliant power and pace to their counterattacks. Scored in all but one of Armagh’s Championship encounters, which included three points against Donegal in Clones to knock the Tir Chonaill men out of the running as the Orchard gained revenge for their Ulster championship defeat. The Silverbridge man has been a big part of Armagh’s development over the last number of years and continues to grow into a real leader.

Conor Doherty (Derry)
The roaming wing half-back announced himself on the big stage with a man of the match performance against All-Ireland champions Tyrone, in their own backyard, during the opening round of the Ulster championship. Doherty was full of unmatchable energy and his work-rate was off the charts that afternoon and he continued that good form throughout the rest of Derry’s summer. Claimed 0-2 in the win over the Red Hands and also chipped in with a point as Rory Gallagher’s men overcame Donegal in the provincial decider.

Eoghan Bán Gallagher (Donegal)
Not the season Donegal would have wanted or hoped for, but Eoghan Bán Gallagher has been a consistent driving force for the Tir Chonaill men during Declan Bonner’s tenure. His pace is frightening, and he constantly punched holes in the Armagh rear guard as Donegal ousted Kieran McGeeney’s men at home in the opening round of the championship. Gallagher starred for Bonner’s men as they reached their 10th Ulster decider in 12 years, but they just came up short in the end against a determined Derry outfit.

Conor Glass (Derry)
One of the first things Rory Gallagher did when he got the Derry job was to ring Conor Glass and convince him to come home from Australia and boy did that pay off in the end. Glass was monstrous around the middle of the field for Derry this season and his tussle with Niall Kearns in the Ulster semi-final was epic. The Maghera star drove over the insurance point in the Ulster final and almost burst the net against Clare with a goal of the season contender.

Gareth McKinless (Derry)
A warrior and a work horse for the Oak Leaf County, McKinless wore the number six jersey but played most of his football out around the centre of the field and led from the front line to constantly drive his teammates forward. Burrowed his way past the Monaghan defence to blast home a first half goal in the Ulster semi-final and grabbed another three-pointer in Croke Park against Clare. The Ballinderry man also got on the scoresheet against Tyrone, scoring a point.

Stefan Campbell (Armagh)
Surprisingly didn’t start for Armagh in the first round of the Championship against Donegal and the game was gone by the time he was sprung from the bench. Campbell earned a starting berth the next day out and was arguably Armagh’s most influential player for the remainder of the championship. Gave a man of the match performance against Tyrone and put in a mountain of work against Galway. While he missed his spot kick during the penalty shootout, that didn’t diminish the brilliant year ‘Soupy’ had.

Rory Grugan (Armagh)
A real stalwart in the Armagh team, Grugan is one of the most skilful footballers in the province. His vision and kick-passing ability is a huge asset to Kieran McGeeney’s side. The Ballymacnab playmaker finished his goal with aplomb inside the opening ten seconds against Donegal in Clones and bagged another major against Galway in Croke Park during extra time. Grugan is a real leader in the team and also had a huge influence on Armagh’s successful Division One campaign.

Ethan Doherty (Derry)
Doherty did all the dirty work and put in the hard yards for Derry and his efforts were rewarded with a Young Player of the Year nomination, where he’ll face opposition from Jack Glynn and Luke Gannon. He chipped in with 0-1 as Derry overcame Tyrone and while he didn’t score for the remainder of the campaign, the Watty Graham’s clubman covered every blade of grass in the Athletic Grounds and Clones as Rory Gallagher’s men finally got their hands back on the Anglo Celt.

Rian O’Neill (Armagh)
The star man in the orange and white, it’s no coincidence that when O’Neill is on form, Armagh usually perform. Showcased his talents against Dublin in the first round of the League during his Croke Park debut and gave another outstanding performance against Donegal in the qualifiers. O’Neill inspired Armagh’s comeback against Galway, making a huge catch to set up a goal and landed that outrageous free kick to bring the game to extra time. The bigger the occasion, the more the Crossmaglen man seems to grow.

Shane McGuigan (Derry)
Derry’s top scorer for the season and the lynchpin of their attacking strategy. Quite often left as the only out and out attacking threat for the Oak Leaf County, McGuigan absorbed the pressure of being the main man and excelled this year. Stroked home his penalty against Tyrone with confidence and hit 1-17 during Derry’s successful Ulster championship campaign. The Slaughtneil star had a field day against Clare, hitting 1-8 (1-7 from play) and claimed 0-3 against Galway as their season ended abruptly.

Benny Heron (Derry)
Benny the G.O.A.T. Heron became a real cult hero in the red and white this year and his eye for goal was essential in Rory Gallagher’s men having the season they had. Rattled off two majors in the semi-final victory over Monaghan and set the tempo against Clare in Croke Park, raising the first green flag of the afternoon. The Galway game didn’t quite plan out as expected for Heron, but his contribution to the Derry cause down through the years will always be appreciated by the Derry fans.