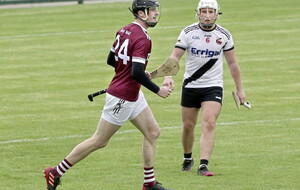 THE smile on Cormac O’Doherty’s face is as wide as when he picked up the first of his 10 county hurling medals.

In his first year of minor, the underage prodigy came on for older brother Oisin – then part of the Emmet’s attack – in 2013 final win over Ballinascreen before becoming a mainstay in the side that also annexed four Ulster titles.

Now as skipper, O’Doherty insists every medal earned must be fully embraced. In his acceptance speech, there was a plea for Slaughtneil fans to milk the glory days.

“As a group of players, you never take a county title for granted,” he said.

“Our character and our hunger, people do question it, and rightly so, because we are on the road a long time. I think the second half showed what every final means to this group of players.”

On a trademark windy Owenbeg Sunday and with 13 wides to their name, there was a sense of an upset at half-time with a hungry Kevin Lynch’s side aiming to end an 11-year gap without a title.

But, panic isn’t a welcome visitor in the Slaughtneil dressing room, with a bank of tight championship games to draw on for experience of how to put the best foot forward.

“We knew we were creating chances; the big thing would be if you’re not creating them, then it’s a worry,” said O’Doherty who had a significant hand in both goals from his playmaker spot behind midfield.

“In the first half, we had 20 chances and only took five of them. We knew the chances were there, so we had the composure to take them in the second half.

“Nander (coach Alex Campbell) has been hammering us with shooting over the last six weeks. It worked against ‘Screen, but it didn’t work today for whatever reason. I think in the second half we were a bit more efficient up front in the right areas.”

Twelve months earlier, O’Doherty lifted the Fr Collin’s Cup with his arm in a sling after a shoulder injury late in the final. It kept him out of their football final against Glen, with an operation needed after Derry’s season came to an end to leave the coast clear for another year at the cutting edge of Slaughtneil’s title hopes.

“The time flew in,” he said of his journey back to full fitness. The lure of championship Sundays kept him focussed.

He scored the third goal in their recent football win over Claudy and will be again be in the selection mix when Paul Bradley ponders his selection for Saturday’s quarter-final showdown with Swatragh.

“They are the games you want to play in,” O’Doherty said. “That’s the big driving force for any injured player, it was the same with Brendan (Rogers) today, he’s a massive asset to us, standing up when we needed him.”

“You see their hunger to win championships, they saw what we have done and their hunger is keeping us going at training,” he said.

“They are freshening things year after year and it can’t be understated just how good that is for us.”

With eight weeks until the Ulster championship, O’Doherty welcomes the gap to put their shoulder to the football wheel before aiming to retain the Four Seasons Cup.

“At the start of the year you always focus on the Derry championship and retaining it. Now we have done that, we can go and focus on our Ulster title.

“We missed it in the Covid year, but we got it back last year and the hunger is still there. We want to drive on and see where we can go. Who knows where this journey can go and we are looking forward to seeing where it goes.”