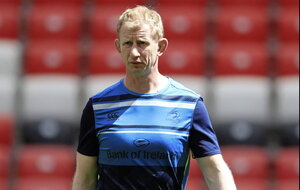 Leinster's head coach Leo Cullen. The Blues will be looking to bounce back after their first trophyless season since 2017

THE United Rugby Championship (URC) kicks into gear this weekend and for the second instalment of the cross-hemisphere tournament a headline sponsor has been confirmed.

Balkrishna Industries Ltd, or BKT as they are more commonly known as, are an Indian company specialising in off-highway tyres.

So come what May, who will be on the road to success and who’ll be left skidding off into the ditch?

How will the South African sides be able to juggle the URC and their debut in European cup competition? Can the Irish teams feed off the success of their national team’s series win against New Zealand? Will the Welsh and Scottish teams realise their full potential and could this year be the year that the Italians make an impact?

With a World Cup to follow this season’s league, the margin for error is as tight as it’s ever been as the 16 teams once again get set to lock horns in battle.

With the game at both club and international level as strong as it is, it’s looking like another season to be dominated by the South African and Irish sides.

Last season, Ulster made significant progress but Dan McFarland will be hoping that it’s a case of lessons learnt as they aim to recover from losing their semi-final against the Sharks deep into injury-time.

A league double over Leinster and away wins in Toulouse and Clermont in the Champions Cup are signs that this squad, made up of mostly local talent, is heading in the right direction. But the manner of losses to Toulouse at home and that URC semi-final means that question marks remain about their ability to see out vital games.

“The bottom line is we lost a semi-final in the 85th minute having more or less controlled the game for 65 minutes.

“We led Toulouse for 156 minutes and gave up a try. That’s us out of two tournaments,” said McFarland.

“We’ve got to look at that and say is there something in how we finish games?

“The previous year, after we lost to Leicester, there was a question around how we came out in the second-half.

“We changed that, we were a dominant team in the third quarter and now we have to finish off.

“Hopefully we sort out the fourth quarter and finish those games off.”

McFarland was speaking after watching his side blow away English Premiership side Exeter Chiefs after a recent pre-season fixture at the Kingspan, 31-12.

It was a game that saw him hand six debuts with the performances of out-half Jake Flannery and flanker Sean Reffell particularly eye catching.

While Flannery will provide stiff competition for the number 10 jersey with Billy Burns, Reffell’s addition will soften the loss of Nick Timoney in November and Six Nations Ireland call ups in the Spring, as well as possibly the Emerging Ireland tour to South Africa at the end of September.

For Munster it was another summer where the changes behind the scenes were the main points for discussion.

Graham Rowntree has at last landed himself his first head coach position. Formally an assistant or forwards coach with England, the Lions, Georgia and Harlequins, the former English prop moves up to the big job in Limerick after two years as their forwards coach.

Two of his most important signings, you could say, were to bring home Mike Prendergast and Denis Leamy to join his coaching ticket.

Prendergast will be in charge of the Munster attack and arrives from Racing 92 while Leamy returns home after a short exodus in Leinster of all places as the sides defence coach. At Racing 92, Prendergast was partly responsible for producing some of the most dazzling rugby in Europe so it will be interesting to see how the Munster back division develops over the next year.

Stability is what Munster have been crying out for and bringing home both Prendergast and Leamy, both cult heroes, will no doubt go a long way to helping to re-establish Munster as one of the top dogs of European rugby.

In Connacht, Andy Friend has stepped up to become Director of Rugby with Peter Wilkins stepping into the head coach position.

Wilkins enriched his growing reputation as a coach just last July when he travelled to New Zealand as part of the Ireland A coaching ticket that played two tests against the Maori, and now he has a real chance to enhance his CV by moving up the pecking order in Galway.

Connacht will be aiming to improve on last season’s disappointing 12th place finish. While they are still one of the great entertainers of the game, their naivety in defence continues to be their downfall as they struggle for consistency.

Recruiting Adam Byrne, David Hawkshaw, Josh Murphy and Peter Dooley all from Leinster could go some way to improving the 50 per cent win rate of last season.

On the brink of the new season, the IRFU announced that an Emerging Ireland squad will travel to South Africa during the opening weeks of the season.

Munster coach Mike Prendergast has said that his side ‘will have to learn to adapt’ while Ulster assistant head coach Dan Soper called it a ‘double-edged sword’.

“You like to see your players getting those sorts of opportunities. Would we have picked a different time? Yeah, possibly, but we’ll just adapt and get on with things,” continued Soper.

The tour coincides with Ulster hosting Leinster and Ospreys but with Ulster due to play two games in South Africa on the weekends following the tour, it may leave them with an advantage for those selected to be already acclimatised to the gruelling conditions.

LAST year was supposed to be a transition period for the Springbok sides, but that script was torn asunder as the Bulls and Stormers made it an all-South African final at the first attempt with the Stormers making full use of home advantage to clinch the title with five points to spare.

Eager to hold on to their title, the Stormers have added second-row Gary Porter to their playing roster from the English outfit the Ealing Trailfinders.

The off-season has seen a mass exodus of South African players move home from European clubs but one player staying up north is Cheslin Kolbe. Despite talks between the club and the player’s representatives, a bold move to entice the wing wizard home to join the Stormers failed to materialise.

They have, however, managed to retain the services of prop Steven Kitshoff.

Prop Kitshoff had been linked with a move to Ulster but he’ll start the season with the Cape Town franchise.

Last year’s runners-up the Bulls have had a busy summer with Jake White adding no fewer than eight new players to his squad.

Backs Chris Smit, S’bu Nkosi and flanker Marco van Staden are just some of the new names heading to Pretoria as Head Coach White looks to build a squad that he hopes will challenge on both league and cup fronts.

Closer to home Leinster will no doubt be expected to lead the Irish challenge.

Despite a number of exits, Leo Cullen has only added two players to his squad as they aim to recover from last season’s failure to land a trophy; a first trophyless campaign since the 2016/17 season.

To offset against the retirement of Devin Toner, Jason Jenkins has been brought in from Munster. In the backs Cullen has picked New Zealander Charlie Ngatai.

Ngatai, who has one All-Black cap to his name, arrives from Lyon and provides added ideal cover in the centre when the likes of Robbie Henshaw and Gary Ringrose are on international duty with Ireland. Yet more depth to a squad that is already dripping with some of the best of what the local game has to offer.

Recruiting Adam Byrne, David Hawkshaw, Josh Murphy and Peter Dooley all from Leinster could go some way to improving the 50 per cent win rate of last season.

It’s difficult to see any title challenge coming from the entrants of the remaining three Unions.

Benetton and Zebre continue to put up a good fight for Italian rugby while the Scottish duo of Edinburgh and Glasgow will be hoping to bounce back from limp showings in last year’s quarter-finals.

Edinburgh losing to eventual winners, the Stormers while Glasgow went down to a 76-14 loss to Leinster in a 12-try romp for the Dubliners.

Last season saw the trend of a diminishing Welsh challenge continue. Not one of the four regions qualified for the play-offs and it’s difficult to see who is going to make the breakthrough this year.

Previous league winners the Scarlets and Ospreys have slipped badly off the radar. Cardiff, have addressed their lowest ever finish by bringing in Liam Williams to their squad. But it looks like being another long season for the Blues as well as the fourth Welsh side, the Dragons.

Johnnies hoping Domhnall Nugent can play some role against Ballycastle