Derry's Glass act eases them into next round of FAI Cup 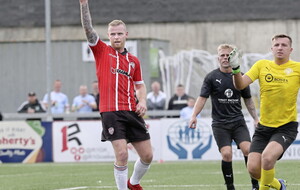 The talented midfielder scored a first half hat-trick, as Derry City eased to a comfortable 7-0 victory.

James Akintunde got the scoring underway after just eight minutes before Glass's treble, which was rounded with a penalty five minutes before half-time.

Akintude made in 5-0 on 62 minutes before another recent arrival from Dundee United, Mark Connolly got on the scoresheet and Jamie McGonigle completed the scoring.

Glass, who only trained with his new team-mates on Friday after joining on-loan from Dundee United, admitted he couldn't have had a better debut.

"It doesn't get much better than that," he insisted.

"It's my first hat-trick professionally and I think the last time I did was under 14s or something, so yeah it's a good feeling. I'm delighted to be here and hopefully I showed that today.

"There's nothing better than hitting the back of the net, especially coming away from Dundee United and coming here, so I'm delighted scoring a hat-trick on my debut."

The 22-year-old praised Derry skipper Patrick McEleney, who made sure he was taking City's penalty to complete his hat-trick, as he got the ball and gave it to him.

"To be fair that was a touch of class from Patrick, I never expected it and I think that tells you everything that this club seems to be about," he explained.

"Obviously I'm only here a day, but it has been incredible how warm and welcoming everybody has been and for Patrick to do that is incredible and I'll forever be grateful for that.

"You can only play who you are up against and at the end of the day you still need to come and perform and hopefully I did that today and gave a glimpse of what I'm about.

"We're now into the next round of the cup and we're delighted about that."

Leading 4-0 at the break, Glass admitted the second half was all about trying to maintain their standards and more importantly get minutes under his belt.

"It is difficult when you're in that position, in the second half it's about managing the game and about tiring them by working side to side and grabbing another couple of goals, which we did, but of course it was important to get minutes into some of the lad's legs," he added.

"In fact I was happy to get minutes into my legs because I haven't been playing that much as we're still in pre-season, so to get that competitive action was really good and will stand us in good stead going forward."

The Edinburgh native knows there are going to be tougher tests ahead and is already looking forward to City's next two league games, against second placed Dundalk and leaders Shamrock Rovers.

"Of course I know we have a few big games coming up and the gaffer (Ruaidhrí Higgins) made a big point about that," he stated. "He told us that this cup tie was preparation for next week.

"I think by putting on a show, which we did in the first half and I think if we can take some of that attacking play into the Dundalk game, which we know will be a lot more difficult, then we'll create chances.

"It's a massive game but I think it's a match we're all looking forward to. It's exciting times ahead as we're still in with a chance of winning the league, so yeah we have two big games coming up, Dundalk and then Rovers, but we'll obviously look to Dundalk this week and after that it takes care of itself.

"I think overall the lads were very professional today and as I said you can only beat who you're up against."