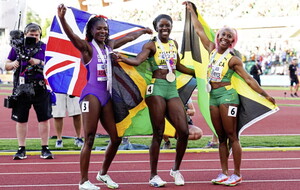 MARK English may have failed to reach the final of the 800m on day seven, but he can leave the World Athletics Championships with his head held high after a battling fifth place finish in his semi-final. English's time of one minute 45.78 seconds (1:45.78) meant that he just missed out on a final spot by a fifth of a second.

The Finn Valley athlete now packs his bags for home ranked 10th in the world with French two-lappers Gabriel Tual and Benjamin Robert being the only Europeans listed above him. Encouraging with the continental championships looming on the horizon in less than a month.

Drawn in the third and last semi-final, the eight starters had the advantage of knowing what they had to do to gain a passage to the final on time with only the first two finishers guaranteed automatic qualification. Consequently, the tempo was fast from the gun as the Kenyan Emmanuel Wanyonyi cut out the pace with English was third at the bell in 52.33 seconds, on target for a qualification on time.

The Letterkenny man still disputed third spot in 1:19.71 as he entered the final 200m. That meant the pace had crucially slipped to outside 27 seconds for that third quarter. Coming off the final bend he was still in fourth but was overhauled by Robert close to the line.

It made no difference as neither was fast enough as Wanyonyi took the final non-qualifying spot in third place with a 1:45.42 timing. Winner of the heat in 1:44.89 was Algeria's dark horse for a medal Slimane Moula.

Louise Shanahan missed out on a semi-finals place in the 800m, with the national record holder crossing the line in fifth in her heat in 2:01.71. Kenya's latest discovery Mary Moraa went out hard from the gun, eased back, and then finished strong for second in 2:00.42. The experienced Natoye Goule was much more restrained in her approach and was rewarded with the win in 2:00.06. Shanahan ranked a respectable 24th overall out of the 45 competitors.

There may have only been two finals decided but they were worth the admission money on their own as the current crop of sprinters served up two tantalising 200m deciders.

Noah Lyles of USA and Shericka Jackson of Jamaica both annihilated the opposition with possibly career-best performances of their careers and recording some of the fastest times in the history of the distance.

Going into the final, Noah Lyles was seen by many as the favourite but 18-year-old US sensation Erriyon Knighton also had his backers. And while Knighton produced his typically strong bend, it was Lyles who had entered the homestraight well clear. And he did not stop there, powering down the last 100m to stop the clock at an American record 19.31 (+0.4 m/s), eclipsing Michael Johnson's mark by one-hundredth of a second and putting himself third on the all-time list behind Jamaican duo Usain Bolt and Yohan Blake.

Kenny Bednarek took silver with 19.77 ahead of Knighton in third in 19.80, completing a second clean sweep of the medals by US athletes following their whitewash of the opposition in the 100m.

Minutes earlier, Shericka Jackson was equally emphatic in winning the women's 200m. In contrast to Lyles, Jackson waited until the home straight before crushing 100m champion Shelly-Ann Fraser-Pryce who looked to be on the way to a sprint double. Her time of 21.45 was a championship record and moved her second on the world all-time list behind Florence Griffith-Joyner's 21.34.

Fraser-Pryce held on well for silver with 21.81 while Britain's Dina Asher-Smith, the 2019 champion, took bronze with 22.02. It was Britain's third medal of the championships following Laura Muir's battling bronze in the 1500m and of course Jake Wightman's incredible victory in the men's metric mile.

The last of Ireland's representative at the championships, Donegal man Brendan Boyce, goes in the 35km walk tomorrow afternoon with a start time of 14:15 BST.