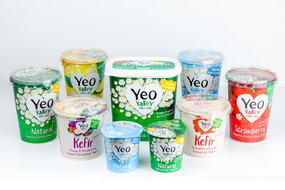 TOMORROW'S PACKAGING SOLUTIONS TODAY: Just some of the company's packaging that will look familiar to shoppers

Greiner Packaging UK & Ireland has celebrated its 50th anniversary at Dungannon, Co Tyrone in the presence of the Greiner Family Council from Austria, representatives of regional and local government, and investors.

At the event, the company announced new investments totalling over £10 million, for the installation of new bespoke machinery, commissioning of a new manufacturing hall, and the expansion of the warehouse from 3,000 to 11,000 spaces.

“For fifty years, we have produced some of the world’s most sustainable packaging for food and non-food applications at our factory in Dungannon,” says director of operations at Greiner Packaging International, Jarek Zasadzinski.

“As we celebrate this important anniversary, we are proud to announce these new investments which follow the more than £35 million we have invested since acquiring Wilsanco in 2006.

“Sixteen years ago, the site was turning over £15 million and today we are achieving £60 million. Our goal is to grow this site to £100 million over the next five to seven years.

“These investments, by Greiner Packaging International, were partly funded by Invest NI, UK government, and EU regional development funds, and have contributed to building a highly successful and sustainable manufacturing business which services hundreds of customers across the UK and Ireland.

“We are so proud of our achievements, of our loyal and committed workforce, and to be celebrating 50 sustainable years in Dungannon in 2022.”

To mark the 50 years, five trees were planted, one for each decade.

Born in Poland, Jarek Zasadzinski joined Greiner Holding AG in 2004 and took a leading role in the acquisition of Wilsanco in 2006.

In 2008, he became the youngest CEO in the history of the Greiner Group. He led Greiner Packaging UK and Ireland into the top 100 most profitable firms in Northern Ireland, doubling the company size to over £30 million, and achieved five major industry awards for the innovative projects introduced in the factory.

ICONIC: The much loved and instantly recognisable Quality Street packaging

Based in Dungannon, Northern Ireland, Greiner Packaging UK and Ireland is celebrating its 50th anniversary in 2022.

The company recently invested over £3.7 mllion in a new PET decontamination and extrusion line to enable the use of more recycled materials in its market-leading packaging ranges.

This is the latest step in Greiner Packaging UK and Ireland’s continued commitment to innovate, increase capacity and reduce its carbon footprint.

Greiner Packaging International is a leading European manufacturer of plastic packaging in the food and nonfood sectors.

The company has enjoyed a reputation for outstanding solutions expertise in the fields of development, design, production, and decoration for over 60 years.

Greiner Packaging responds to the challenges of the market with two business units: packaging and assistec.

While the packaging unit focuses on innovative packaging solutions, the Assistec unit is dedicated to producing custom-made technical parts.

Greiner Packaging employs a workforce of over 4,900 people at more than 30 locations in 19 countries around the world. In 2021, the company generated annual sales revenues of €772 million (including joint ventures), which represents almost 35 per cent of Greiner’s total sales.