Brian Feeney: Micheál Martin will be a lame duck leader 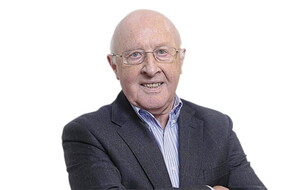 At the Fine Gael ard fheis in Athlone at the weekend (as usual unnoticed by unionist northern media) Leo Varadkar starkly marked out the battle lines for the Republic’s next general election.

He intends the decisive contest to be between Fine Gael and Sinn Féin. He also wants to entice the failing Fianna Fáil to join with FG as the junior partner in a coalition. Varadkar was clear and unequivocal. He would “never” go into government with Sinn Féin, “no, no way, no chance.” SF’s policies “would be a disaster for our country” by which he means the south.

The soon to be gone forever Taoiseach Micheál Martin couldn’t be as forthright. Then again, Martin is such an indecisive ditherer it’s hard to recall him being forthright about anything which is perhaps one of the reasons Fianna Fáil has lagged behind Fine Gael in the polls since FF’s dreadful election in 2020. On the matter of relations with Sinn Féin Martin can’t be so forthright because a substantial chunk of his party believe making a deal with SF in 2025 is preferable to a deal with Varadkar. They think another FF/FG coalition is the end of FF. They think Martin’s obsession with Sinn Féin devouring FF lost the party many seats in 2020 because all Martin campaigned about was the danger of SF, SF, SF, a stance curiously reminiscent of La Dame Foster.

These Fianna Fáil members and TDs fear that going in with Varadkar yet again might mean a joint campaign, but worse, show the two civil war parties are committed to block change. That could be suicidal facing a young electorate among whom Sinn Féin enjoys overwhelming support. Varadkar is now openly courting older Fianna Fáil voters, those who support Martin’s position. At the ard fheis Varadkar went out of his way to be emollient towards Martin describing him as, “a good taoiseach who has been a voice for decency, kindness and for common sense”. Faint praise: note no endorsement of Fianna Fáil’s government policies on housing or health.

The worry of Martin’s opponents in Fianna Fáil is that the electorate will not see any difference between FF and FG and indeed after years of governing together in coalition it is difficult. Martin’s critics complain he has failed to maintain any distinctive FF identity and paradoxically, despite leading the so-called ‘republican party’, has actually handed over the advocacy of Irish reunification to Varadkar and Simon Coveney.

At the Ireland’s Future convention in October Varadkar laid out his aim of one united sovereign Irish state. Coveney has said he wants Irish unity in his lifetime. Meanwhile Martin concentrates on appeasing unionists in case he sounds too like Sinn Féin. Yet by distancing himself from Sinn Féin Martin has turned his back on northern nationalists the majority of whom have consistently voted for SF for almost twenty years. In the latest poll Sinn Féin had four and a half times the support of the SDLP – 32 per cent to 7 per cent.

The bad news is that it seems Martin, as incoming tánaiste, wants to be Minister of Foreign Affairs, mainly it seems to position himself to be Ireland’s EU commissioner. After all, in the old boys' club it’s Fianna Fáil’s turn.

If he does move to foreign affairs it bodes ill for the Irish government’s relations with SF and northern nationalism because Martin will do all he can to hinder progress towards constitutional change. On the bright side he mightn’t last long because substantial numbers of his TDs regard him as an electoral liability. They are determined he cannot lead the party into the next general election. For them the question is not if, but when, he’s replaced by a new leader. In any case they want rid of him before the local elections in 2024.

Whether he goes early or late he will be a lame duck leader for his political career is over. Hanging on as a lame duck tánaiste too will be undignified.

Brian Feeney: Micheál Martin will be a lame duck leader