Lynette Fay: Revenge might be a dish best served cold but unlike Taylor Swift and Miley Cyrus, it's definitely not on my menu

Hell hath no fury like a woman scorned would apply to the early years, but not now. Anger and revenge as emotions can gobble us up and spit us out... 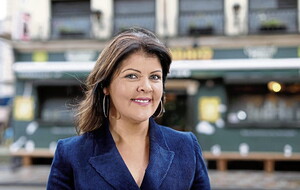 REVENGE is a dish best served cold. I understand this sentiment, but don't subscribe to it. I probably did at one point in my life. But seriously, if you feel the need to exact revenge, and get back at someone long after an event where you felt you were wrongly done by, surely that means that you're still letting the circumstances or the people get under your skin, and that can't be good for you. Where is the revenge in that?

Exacting revenge in relationships happens all the time, and this week we have witness the return of the break-up song and all the drama that goes with it.

Why do we love knowing the fine detail of how 'A-list' relationships end? At the moment, US singer Miley Cyrus – who never does things by halves - is having the last laugh on her ex-husband Liam Hemsworth, as her 'break-up'/'revenge' song Flowers is huge.

It's a good enough song, I suppose. Miley tells us that she didn't want to leave the relationship, then she reminds herself that she "can buy myself flowers". She can love herself, and that's all she needs. Self-empowerment is the message of this break-up song.

On a side note, I'm fairly sure that our Miley can well afford to buy herself more than flowers to cheer herself up. The royalties from this song along will buy her a bunch or two.

Miley has a long way to go to overtake the queen of the modern break-up song, Taylor Swift, who doesn't mince her words or sentiment in her chart-topper, We Are Never Ever Getting Back Together. Taylor's message there was fairly succinct and to the point. I can't remember who she was addressing in this song, but she more than makes her point.

There is nothing new about the empowering break-up – Dolly Parton nailed it with I Will Always Love You, but she showed vulnerability by booking a one-way ticket on the 'heartbreak' express. Carly Simon served up one of the most revenge-laden break-up songs ever with You're So Vain – but anger is only one part of the break-up, and it depends on the circumstances.

During my teenage years, empowering songs wouldn't have been on my mix tape. Oh no. If it wasn't a full on 'cry your lamps out' song like Extreme's More Than Words or Madonna's A Tale To Tell or U2's With or Without You, then there was just no point.

I graduated in later years to the absolute heartbreaker of Andy M. Stewart's Where Are You (Tonight I Wonder) - only Mary Dillon's version of that song will ever do.

The therapeutic attributes of sad songs have been scientifically proven. I will write about those another time.

Back to the revenge. What motivates revenge? Why do we feel the need to get back, to get one up on someone else, to get even? The idea of this is too much for me to be bothered with.

Shakira and her ex are currently embroiled in a tit-for-tat exchange which is proving to be lucrative to both of them, and is creating plenty of publicity for them. Lana Del Rey erected a billboard for her new album in her ex's home town, making sure she will most definitely not be out of sight or mind.

I don't know how they can be bothered with it. Why would you want your break-up to be so public?

Maybe we embrace these tactics when we're younger. The anger that comes directly after a break-up is part of the process. How we deal with it is another story altogether.

Hell hath no fury like a woman scorned would apply to the early years, but not now. Anger and revenge as emotions can gobble us up and spit us out.

Relationships in life come and go. Sometimes we move on quietly, sometimes prefer the blaze of glory in the moment, and suffer the consequences later.

The older I get the more philosophical I become. I just try to 'let it go'.

Deirdre Heenan: Does Sunak have the stomach to stand up to the Brexit ultras?

Lynette Fay: Revenge might be a dish best served cold but unlike Taylor Swift and Miley Cyrus, it's definitely not on my menu