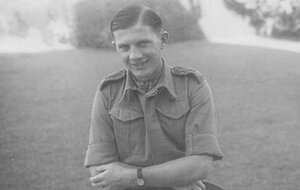 ROBIN Rowland was one of the last surviving veterans of the fabled ‘Forgotten Army’ which achieved one of Britain’s greatest – but least celebrated – military victories.

The Co Antrim man fought with Commonwealth troops against the Japanese in the sweltering jungles of the Far East over three brutal years of the Second World War.

In the pivotal battle of Kohima in 1944, he was part of a small force that managed to repel an invading army many times their size to arrest their seemingly unstoppable advance into India.

It was Japan’s first major defeat and a turning point in the war, starting a rout which saw the Fourteenth Army reconquer Burma.

After the Japanese surrender Robin returned home to resume his studies in law, settling in Belfast and enjoying a distinguished career as a barrister and judge.

During his time on the bench he had the distinction of sending down former DUP leader Ian Paisley twice for breaches of the peace.

With the death of his beloved wife Kay, he relocated to England in retirement where he enjoyed fishing and rugby and had time to revisit his war years, travelling to some of the battlesites and committing his photographic memory to moving memoirs.

He achieved many remarkable things over his 100 years but always said the war was the defining experience, making him the man he was.

Born in Larne hospital in 1922, Robin was brought up in a farmhouse outside Ballyclare and was a pupil at Ballyclare High School before enrolling at Queen’s University.

His father was a professional soldier and he had little hesitation when war broke out in following his path.

Shipped to India shortly after the Japanese attack on Pearl Harbour, he trained as an officer and was posted to fight alongside Indian troops with the 2nd Punjab Regiment, becoming fluent in Urdu.

Japanese forces had swept through Malaya, Hong Kong, Singapore and Burma and the Fourteenth Army was tasked with turning back the tide.

In Burma, they survived a fierce assault at the Battle of the Admin Box, defending positions for seven weeks.

They then travelled 200 miles by rail, river and road to relieve besieged troops at Kohima in north-east India, where around 1,500 men were being attacked by a division 10 times that size.

The battle in 1944 was crucial to Japan’s hopes of annexing India and the defenders withstood wave after wave of attacks, in what Robin would recall as “the nearest I’ve come to hell”.

Described as the ‘Stalingrad of the East’, at one point only a tennis court separated the two sides in exchanges of vicious hand-to-hand combat.

The Japanese were eventually repelled with the loss of more than 50,000 men and although never entering public consciousness in the same way as victories such as Waterloo or El Alamein, it was still voted in 2013 as Britain’s greatest ever battle.

With Robin now promoted to Major, the troops pursued the Japanese into India, marching 900 miles through the monsoon season and recapturing Rangoon.

Before being demobbed in September 1946, he met Kay Busby, above, an army nurse serving in Kuala Lumpur. On returning home, he sent a telegram confessing his undying love and urging that they meet in London.

After a five-year engagement, by which time he had established himself as a man of means, they married and enjoyed a long and very happy life together in Knock in east Belfast, until Kay’s death from cancer in 1991.

Robin’s distinguished career as a barrister saw him make five appearance in the House of Lords, the UK’s highest court.

He ‘took silk’ in 1969 and the following year was lead barrister in one of the north’s first major paramilitary trials, when nine loyalists were found not guilty by a jury of causing explosions intended to bring down the O’Neill government.

He also acted in the court of inquiry for the Scarman tribunal into the outbreak of violence in 1969.

In 1974 he was made a county court judge, the first to be directly appointed by the queen following the imposition of direct rule.

Based in Downpatrick, the role required him to sit one week each month in the crown court in Belfast’s Crumlin Road.

Although it was a surprise that he was never elevated to the High Court, Robin was proud of how far he had travelled from a humble background.

Robin was appointed a judge in 1974

He was resolutely apolitical and taught his sons that there is always two sides to a story, and judgment should be withheld until both are heard.

His reputation for impartiality and independence, and the fact he was not a member of the Orange Order, perhaps made him less of a target for republicans and he always maintained minimum security, even flouting that regularly to go fishing with his son Andrew in the hills above Belfast.

Security was increased when details of Kay’s visits to the Royal Victoria Hospital for leukaemia treatment were found in an IRA safe house, but unlike most judges he never kept an armed guard.

With a background as an army officer and barrister, he was unsurprisingly a wonderful orator, and his love of poetry ensured he could pluck the perfect line from Yeats or Shakespeare to mark any celebration.

He didn’t talk about his war experiences for many years, but in 1998 an advert for a boat trip in Burma sparked an interest in retracing some of that path.

A visit to one village destroyed during the Japanese retreat proved cathartic when he was received warmly by its now thriving population.

In 2002 he also got a chance to return to Kohima at the invitation of the Punjab regiment and laid a wreath on the tennis court in a deeply moving visit. He recorded many of his remarkable experiences in a book of memoirs.

After a long and fulfilled life, Robin Rowland died on November 9 at his home in South Luffenham, Rutland. His funeral took place yesterday.

He is survived and sadly missed by his sons Peter and Andrew, grandchildren and great-grandchildren.

Robin Rowland: From Burma to Belfast, a life of duty and service 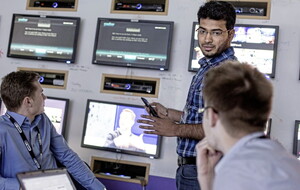 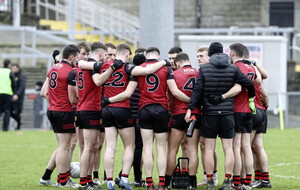