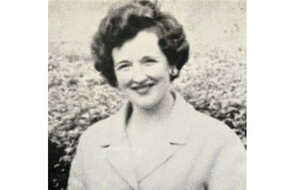 Marese as a young teacher

MARESE Finnegan was an inspirational educator, a delightful friend and a doting mother and grandmother who leaves a legacy of fulfilment, love and laughter with those who knew her.

A native of the Glens of Antrim, Marese spent a lifetime teaching on the lower Falls in west Belfast.

Through some dark days she was a shining light in the lives of generations of children as she sought to ensure they benefited from the life-changing opportunities a good education can provide.

At her funeral, her godson Fr David Delargy said that at a time when employment options were few, she was determined that those under her care would be given the chance to fulfil their potential.

“That sense of effecting change and advocating on behalf of the people of the lower Falls was something which stayed with her throughout her life,” he said.

“The kindness she showed to the pupils under her care was rewarded with the deep respect, affection and friendship of those young men over the years as they progressed with their careers and family lives.”

Marese was born in 1933, the second of six children to Mary and Robert McMullan.

Her parents had been living in the US but Mary, not wanting to have the child in the sweltering heat of a New York summer, travelled home to Glenariffe for the birth.

Spotting a beautiful house for sale, Mary then persuaded Robert to come home and they raised their family in The Bay.

Fr Delargy said she was a friendly, confident and outgoing child: “Passing through her home village she seemed to know everyone and everyone knew her. She was happy to stop and chat with whoever she might happen to meet on her way. This open, friendly nature was a quality she carried with her throughout her life.”

She also had a strong sense of community with a lasting interest in the GAA seeded in early family life, which saw her brothers Bobby and Dermot hurl for Antrim with distinction.

Marese was a bright student at St Louis Grammar School in Ballymena and she earned a scholarship to St Mary’s Training College where she qualified as a teacher. It was during this time that she also met Hugh Finnegan.

They married in 1960 and set up home in Hillhead Park in Belfast before moving to Myrtlefield Park off the Lisburn Road, which became the family home for nearly 50 years.

An avid reader all her life, Marese had a great interest in current affairs, and even in her eighties she took a week-long course in Donegal to refresh her knowledge of Irish.

As a young teacher in Slate Street PS in west Belfast she was deeply moved by the deprivation and inequality of opportunity she witnessed and she later became involved in the civil rights movement.

With her enduring passion for equality, social justice and education she later joined the SDLP, remaining politically active throughout her life.

Marese as a young teacher

In 1957 she joined the staff of St Finian’s, a primary school run by the De La Salle Brothers. She would eventually become its first lay principal and the last before its amalgamation with St Vincent’s to become St Peter’s.

Former pupils recall a passionate and enthusiastic teacher who made learning fun and was attuned to each child’s individual needs, long before this was adopted across the education curriculum. She kept in touch with many long after they had moved on.

Marcas Ó Murchú, Visiting Professor of Irish Language, Music and Culture at Buenos Aires University, said: “She truly cared about her students succeeding and added so much value to our lives through her methodical teaching style and organisational skills.

“When one task was completed, she would have extension work, buying classroom supplies out of her own pocket and often taking her own children’s reading books into school so that we could all work at our own individual levels. All in her care were catered for.

“She knew what the ‘educare’ at the root of education meant, drawing out the best possible from each individual pupil. I have spent years passing on the skills she taught me.”

In home life, Marese and Hugh had five children – twins Greg and Siobhan and then Donagh, Aiveen and Shane.

She was a “quintessential Irish mother who did everything for her children” and adored her 15 grandchildren, Fr Delargy said.

“She lived life to the full, and even throughout her illness she always greeted visitors with that iconic smile. She made everyone feel at home when with her. She was genuinely interested in people and in her presence, you knew that you were important.

“In the hundreds of messages the family have received the consistent line has been that Marese was a lady, beautiful both inside and out. A woman of substance who always carried herself with dignity and style.”

In retirement Marese loved to travel with Hugh and her sister, Sr Enda, and relished any family gathering or social occasion.

She had a strong faith throughout her life including a devotion to the Sacred Heart of Jesus – there was always a candle burning before the statue in the kitchen where she would pray for everybody.

Predeceased by her husband in 2019 after nearly 70 years by each other’s side, Marese died on May 19 this year.

She is survived and sadly missed by her five children, 15 grandchildren and siblings