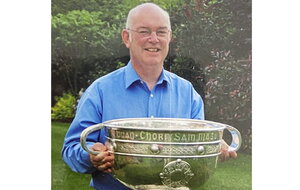 Dad was a man of great integrity, a stalwart of Catholic education and an infamous exponent of the art of storytelling.

He loved the craic and he loved people. It was a love that started behind the counter of his father Harry’s greengrocer shop as he conversed with customers who were out getting their “messages”. He listened to every exchange and was captivated by the colourful characters. Fifty years later he would still regale us with stories from that time, word for word, as if they had happened yesterday.

It was his happy place and gave him many cherished memories that stayed with him to the end.

Joseph McNamee – or Joe, as he was known to most – was born in 1954 to Harry and Nan McNamee and was the eldest of four siblings. They lived above the family shop in Obins Street in Portadown.

For Dad, Catholic education was not only a job, but a vocation and one which he answered with passion and determination. In living out his own strong faith he inspired his students to do the same.

As one student fondly remembers: “Mr McNamee was a model and inspiration – a man of faith who encouraged others to believe in a God who believed in them. He loved enabling his students to reach their potential by being the people God created them to be.”

Dad was a trusted colleague, friend and mentor and was spoken of fondly amongst his peers in education. He made a positive contribution to Catholic education as a teacher, vice-principal and principal, all across the north, from Belfast to Magherafelt and from Glengormley to Bangor.

This involved a lot of travel but he was never alone as he would have the cassette player on the go, with Tommy Makem, Christy Moore and storytellers like Len Graham and the late John Campbell keeping him company.

Dad loved listening to Irish music and he always encouraged us – and his students – to play music as he said it gave us two things: a language to take anywhere and a meal ticket for life. He wasn’t wrong.

While working at St Thérèse of Lisieux PS in Belfast, Dad met Margaret Mary Fox, who was a midwife at the Royal Maternity Hospital. They were married two years later, and it wasn’t long before they had filled their home in north Belfast with children.

After losing their first child, Francis, to a miscarriage, Maria arrived, followed by Joseph, Gerard, Paul, and Michael.

Dad was a great father and sought to give us every opportunity in life. Whether it was sport, music or drama he and Mum were always supportive of our endeavours. Even in later years while dealing with his own illness, Dad was more concerned with how we were doing and was always putting us first.

As parents go, we couldn’t have asked for better.

Being born in the Marian year of 1954, it was perhaps not surprising that Dad felt a certain affinity with Our Lady, and he sought to honour her through his commitment to the sick at Lourdes where he volunteered each summer.

Although he had no medical training, he treated them with care and relieved their pain with his jovial, infectious personality and love for the craic. He listened as they shared their stories with him, and no doubt told them a few of his own, promising to make a long story short but doing the exact opposite. He would then retire to the Jean D’Arc Hotel to enjoy a singsong. By his own admission, Dad didn’t have a note in his head but it never stopped him singing along.

In addition to music, Dad’s other passion was the GAA. On trips to Croke Park, he would tell us of the times his own father drove them to Dublin back in the day.

He also wanted to instil a love for Gaelic Games in his students. When he was at St Joseph’s Boys’ School, Magherafelt he sought funding from the GAA for kits for the P7s. When the money wasn’t forthcoming, Dad paid out of his own pocket. Being the modest man he was, we never heard of this act of generosity until after he had passed.

Dad will be dearly remembered as a devoted family man, a great Catholic educator and as a storyteller like no other.

We are thankful for the gift of his life and are comforted to know he is at peace and undoubtedly having a good yarn with the friends and family that went before him.

Joe McNamee died on 28 September 2021 aged 67. He is survived by his wife, five children, five grandchildren and three siblings. His anniversary Mass will take place at St Thérèse of Lisieux Church at 10am on Saturday October 1.