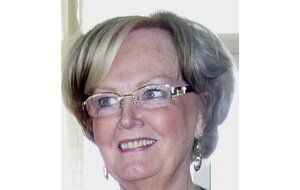 Maureen Hegarty was one of the greatest singing talents to emerge from Derry.

Maureen Hegarty loved to share her natural talent for singing.

With legions of fans and supporters in Ireland, Britain and throughout North America, nothing gave the Derry soprano greater satisfaction than to witness the joy her voice brought to listeners.

The reaction to news of her death at the age of 79 was a measure of the true warmth and love people had for her and her talent.

Born into a family of eight children, Maureen (née McGuinness) grew up in Philip Street in Derry’s Pennyburn area.

It was there that her love of music, dancing and singing was cultivated and nurtured.

By her teenage years, Maureen’s ability as a singer was already being noticed. Like so many other gifted Derry people, she found voice through the city’s annual Feis Dhoire Cholmcille.

Maureen Hegarty won many trophies as a young woman at the Feis Dhoire Cholmcille. Picture from Derry Journal

Legendary Derry musician, teacher and choirmaster James McCafferty was quick to recognise Maureen’s special natural gift and, in 1958, he brought her to the US as part of the Little Gaelic Singers tour.

It was on The Ed Sullivan Show that the teenage Maureen and her colleagues were first introduced to the wider US audience.

The show had a reputation for introducing some of the world’s greatest musical names, including The Beatles, The Stones, Stevie Wonder, The Doors and others. The reaction to the little Irish singing group was phenomenal.

It was also on the tour that Maureen met some of the biggest entertainers of the day, including Bing Crosby and Rosemary Clooney.

Back home, Maureen’s career took off. She played with many of the biggest names in British and Irish showbiz, including Josef Locke, Val Doonican, The Dubliners and The Chieftains.

The natural purity of her voice resulted in her being asked to present her own BBC series, Sounds Irish, while she was also a frequent favourite on RTÉ and UTV.

Maureen’s ability to interpret Irish ballads and airs, and in particular Moore’s Melodies, meant she was in constant demand from the 1950s through to the present century.

Her haunting rendition of The Meeting of the Waters has won over a new generation of music lovers thanks to modern technology.

Maureen Hegarty was one of the greatest singing talents to emerge from Derry.

However, despite her fame and reputation, Maureen remained humble and never forgot her Irish and Derry roots.

“Nothing gave her more satisfaction than giving joy to people through her singing and she loved teaching other young people; she had endless patience,” Ms Townsend said.

Despite her great talent, Maureen was always humble, modest and self-depreciating.

Ms Townsend recalled as a child the McGuinness family gatherings at Philip Street where everybody sang, danced, recited poetry and played music. Maureen took her place with her brothers and sisters, without a hint of her huge reputation; at home she was just one of the McGuinness girls.

“Maureen was a very warm and loving person and I think that, as well as her incredible voice, endeared her to people. She was generous with her talent; in a way, she just couldn’t say no to any request for help,” she said.

Derry bookshop owner Jenni Doherty said Maureen and her sister Sarah (Sarah Townsend’s mum who sadly passed away in July just weeks before her sister) were “beautiful and gorgeous”.

She also recalled the fun side of a very special lady.

“Such a funny, generous and honest soul – and she made the best home-made marmalade jam,” Ms Doherty said.

Family members also recalled Maureen’s quiet side. She brushed shoulders with world leaders and some of history’s greatest singers but she was most happy at home with her husband, the late Noel, her children, Shauna, Martin, Paul and Declan, and in later years, her grandchildren.

Her son Declan, who followed his mum into the music industry, said she was incredible, simply his “rock”.

Maureen Hegarty died on August 3 and was laid to rest at Ballybrack cemetery following Requiem Mass at St Pius X Church in Moville, her parents’ home town, in her beloved Inishowen peninsula.