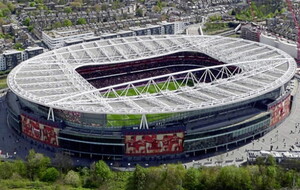 BENNY Kelly left an indelible mark on the landscape of London through some of the best-known buildings of the 21st century.

The Newry man was behind iconic projects including the Millennium Dome and Millennium Bridge as well as the Emirates and Olympic stadiums.

As regional manager for civil engineering giant Sir Robert McAlpine, he was charismatic, committed and driven to succeed.

His work ethic was legendary and his competitive spirit was also reflected through a passion for racing yachts.

Benny came from humble beginnings as the eldest of four children in a working-class family in Newry.

He attended Abbey CBS Grammar School from 1957 to 1964 and studied engineering at Queen's University, where he was a talented runner and captain of the Harriers team.

He joined Sir Robert McAlpine on graduating and would remain loyal to it his entire career.

For his first project, an extension to a brewery, he made an error with measurements which resulted in it being built a foot out of position.

However, that was very much the exception and his leadership skills saw him quickly advance to take charge of the company's operations in the north-east of England, overseeing projects including Nissan's first car plant in the UK near Sunderland.

He was made regional director for London and the south-east in 1993 at a time of recession and enormous pressures on the industry.

Having weathered the storm, he delivered the Milllennium Dome – easily identifiable in satellite images of London – under intense public and political scrutiny.

The project he perhaps enjoyed most was the Emirates Stadium for Arsenal FC. Having also been at school with Pat Jennings, he enjoyed a close association with the club.

The stadium for the 2012 London Olympics was another enormous challenge but was delivered on time and under budget as he entered into retirement.

Benny lived to work but he also enjoyed the trappings of success, owning a TP52 yacht which he raced in the UK and the Caribbean.

He developed Parkinson’s Disease in 2005 but was determined to live life to the full and went to great lengths to treat his condition.

Predeceased by his parents Arthur and May, Benny Kelly died aged 77 on July 22 in London.

He is survived by his daughter Nicola, son Justin, and siblings Peter, Anita and Gervase.

His funeral Mass was celebrated on Thursday in Cloughoge outside Newry, where he was buried in the family plot.