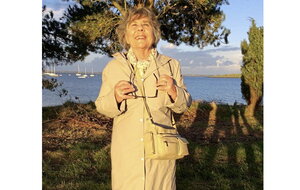 HEATHER Boyd was an environmentalist, naturalist, pacifist, musician and watercolour artist whose peace-loving soul touched the lives of everyone who knew her.

Heather was born in 1932 in Comber, Co Down into the Andrews family, which boasted a long tradition of flax-spinning and politics.

Her grandfather was John Miller Andrews, leader of the Ulster Unionist Party and Prime Minister of Northern Ireland during the Second World War (1940-43).

He also had three distinguished brothers: Lord Chief Justice Sir James; Thomas, managing director and chief architect at Harland and Wolff who designed the Titanic and died on its maiden voyage, and William, a director at the Andrews Flax Mill in Comber and president of the Irish Cricket Union.

Thomas Andrews was managing director and chief architect at Harland and Wolff and designer of the Titanic, dying on its maiden voyage in 1912

Her father, Sir John (Jack) Andrews, was owner and managing director of the Comber mill and as Mid-Down MP, known for his liberal and inclusive unionism, he served as Stormont Finance Minister and Deputy Prime Minister.

With her siblings John, Tom and James, Heather enjoyed an idyllic childhood on the family farm, driving a tractor from the age of 12 and developing her deep love of sailing – and racing skills – on Strangford Lough in her father’s River Class boat Shimna.

Her mother, Elaine, was an accomplished pianist from Newport. Heather followed in her footsteps by studying at the Royal College of Music and, after training at Stranmillis College, took up a career as a private piano tutor.

Always keen to encourage music participation in the community, she sat on the organising committee for the Holywood Music Festival for many years and enjoyed annual visits to the Wexford Opera Festival.

After marrying Trevor Boyd in 1955, the couple moved briefly to London before settling down and starting a family initially in Holywood and then Helen’s Bay.

They were a formidable team. Having inherited her father’s belief in reconciliation, liberal unionism and the need for peace, Heather and Trevor played an active role in the pro-power-sharing Unionist Party of Northern Ireland right up until its demise in 1981, and actively campaigned for the UK's entry to the European Union.

Heather also helped raise funds for the Corrymeela Community, amongst other charities.

As passionate naturalists, nature conservationists and wildlife enthusiasts, she and Trevor were central to the activities of the Northern Ireland Butterfly Conservation Society and the Belfast Naturalists’ Field Club. They fully grasped the need to protect biodiversity before much of the rest of the world woke up to it.

Heather continued to race in River Class yachts on Strangford Lough until the late 1980s. She and Trevor also sailed in their two-mast wooden yacht on two round-Ireland cruises, to Brittany, the Scottish Hebrides and across the North Sea to Norway, Denmark and Sweden.

The pair developed a passion for Denmark following the marriage of their daughter to a Dane and, as very early campaigners for energy conservation and a low carbon society, in 1983 they built in Helen’s Bay one of the very first eco-friendly homes in Ireland.

Heather played an active support role for Trevor as an amateur meteorologist with the UK Met Office through their Helen’s Bay weather station. His service to the Met Office eventually brought Trevor an MBE and Fellowship of the Royal Meteorological Society.

As a keen watercolour artist, Heather enjoyed her weekly painting group and combined this with her love of travel to visit Krakow and Budapest during the communist era with her Queen's University extra mural art group.

She was also the proud custodian of the Wiles Lecture Series at Queen's, set up by her mother-in-law to promote the study of the history of civilisation.

Heather was a role model. Her deep personal faith and Christian values were at the core of everything she did and her positive attitude, her kindness and her smile enabled her to reach many people.

She died aged 90 in Bangor on July 5. Predeceased by her husband in 2010, she leaves her brother Tom, her children Peter, Virginia, Robin, Kim and Antony, 14 grandchildren, seven great-grandchildren, and many other loved ones too many to mention.

Their lives are all the richer for benefiting from her kindness and love. She will be missed by all who were lucky to know her.