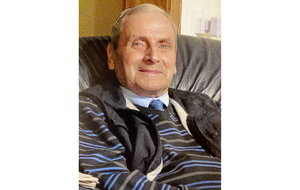 DADDY never liked to see people go – and his final words to them were always, “And when will you be back?”

He loved meeting people and there was no-one he wouldn’t and couldn’t talk to.

And it was this love, respect and kindness for others which has left the deepest mark. Anything for the parish, the club, the band, the Pioneers or the community had to be supported. Every wake attended, Mass heard and give, give, give to everything.

He lived out the call of Christ in the Gospel: he visited the sick at home and in hospital and he clothed the naked, for he and Mam looked after us and those they fostered – no-one was a stranger for they knew they were welcomed.

Michael Benedict Bradley was born in 1936 in Inisclan, Mountfield, Co Tyrone, the seventh of eight children to Francie and Roseanne Bradley. When someone would ask him his date of birth, he would respond: “I’m a 1936 model – and if you forget the ’36 bit, don’t forget the bit about the model!”

It was the hungry thirties, times were hard and luxuries few. However, neighbours have recounted Daddy’s kindness and generosity. Every year, without fail, the first bucketful of potatoes he dug would be given away, no matter how little he had.

He loved his childhood, upbringing and home background. He loved his parents and cherished his brothers and sisters – he was the last to marry and leave home.

A simple diet of fresh homemade bread, potatoes and cornflour stood him in good stead, for he had a robust constitution to the end.

He went to school in Cashel and then to work in Charlie Eastwood’s shoe shop in Omagh, cycling there and back. But eventually, it would be to his brother John that he went as a labourer.

He worked with Bradley & McElhatton for 21 years, before a fall from a scaffold prematurely ended that episode in his working life. He missed the building site immensely – but the stories were epic. Places like Kinawley, Brougher Mountain, Maghery and Loughmacrory became the reference points for our childhood.

Dad bought his first car, a Triumph Herald, on 6/6/66 – if you were at all superstitious, you wouldn’t have travelled in it, but travel Dad and Mam did, around Ireland and the Atlantic Way long before it was named.

He loved cars and bought a new one every 14 months – I think he liked the smell. He’d head to the car too on a Sunday afternoon for a snooze and to listen to Michael O’Hehir or Mícheál Ó Muircheartaigh relay epic clashes from Croke Park. And we’d follow him there, and torture him.

He loved football and acting as linesman, waving the flag or raising his hand but always in the direction of his own team: Mountfield or Killyclogher. As a child he had played Dick Whittington in a play at the age of nine and there was a touch of the performer in him throughout his life.

He married Mam in 1968 and they were the delight of each other’s hearts. They were inseparable – Mass in the morning, the post office afterwards, the town in the afternoon.

Daddy and his father had gone to Bundoran by train when he was young – and he and Mammy still loved it. When we got a house there 10 years ago, he felt elected.

With Mack McDermott, he ran the Gortin pioneer discos for years and, as a result, is probably partially responsible for the marriages of quite a few.

He read The Irish News every day for over 70 years. Nestle’s creamery lorry would deliver it and as soon as he heard the cans rattle, he’d come up from the fields below the house and sit and read. Life was well paced. And a cream bun or two always helped.

Beyond his love of the paper, feeding the cows five or seven times a day and talking to them, and watching Fair City, Tipping Point and the Irish Country Music Channel, it was Daddy’s deep faith that shaped and sustained him.

In many ways, he was a priest at heart. He did Lough Derg for 49 consecutive years – he said it was his holidays, and Mammy said those three days were hers too. He read his prayers and prayed every day for hours. I could only marvel at him.

Before Mam died six years ago, he said there’s two things we’ll do: we’ll keep saying our prayers and we’ll take each day as it comes. He took to his heart the words of Padre Pio – pray, hope, and don’t worry. And that was how each day was taken over the past few years as he enjoyed life to the full.

We pray that this man who welcomed and spoke to everyone will now be welcomed by those whom he loved and by the God whom he served and worshipped every day.

Michael Benedict Bradley died aged 86 on June 24. He is survived by his five children, six grandchildren, a sister and a brother.