Queen Margrethe (82), who has been on the throne for 50 years, cancelled her official duties after the Tuesday night test, according to a royal household statement.

Queen Margrethe previously tested positive for the virus in February.

At the time, the palace said she had received three doses of a Covid-19 vaccine.

Queen Margrethe was among the dignitaries who attended Queen Elizabeth’s funeral at Westminster Abbey on Monday.

The Danish monarch’s half-century reign makes her Europe’s longest-serving sovereign following the September 8 death of Elizabeth (96), who ruled for 70 years.

Out of respect for the late British monarch, Queen Margrethe had asked her court to adjust the September 10-11 programme for her own 50-year anniversary commemorations.

Among the events she cancelled at short notice was an appearance on the Amalienborg Palace balcony to greet well-wishers and a ride in a horse-drawn carriage through Copenhagen.

Queen Margrethe was proclaimed queen on January 15 1972, a day after her father, King Frederik IX, died following a short illness. 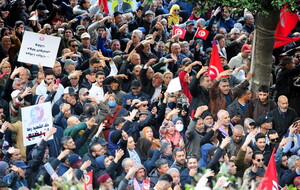