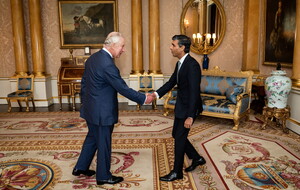 King Charles III welcomes Rishi Sunak during an audience at Buckingham Palace, London, where he invited the newly-elected leader of the Conservative Party to become prime minister and form a new government. Picture by Aaron Chown/PA Wire

New British prime minister Rishi Sunak vowed to fix the "mistakes" of Liz Truss's leadership as he braced the nation for "difficult decisions" ahead.

The freshly appointed Conservative leader warned the UK is facing a "profound economic crisis" in his first speech after being asked to form a government by King Charles.

Over an hour after Ms Truss defended her botched economic strategy in her farewell speech from the Downing Street, Mr Sunak stood outside No 10 criticising her brief and chaotic tenure.

Mr Sunak said his predecessor, whose 49 days in office made her the shortest-lasting PM in history, was "not wrong" to want to drive up growth, describing it as a "noble aim".

"But some mistakes were made. Not born of ill will or bad intentions - quite the opposite in fact. But mistakes nonetheless," he added.

"I've been elected as leader of my party and your prime minister in part to fix them - and that work begins immediately."

Mr Sunak (42) became the UK's first Hindu PM, the first of Asian heritage and the youngest for more than 200 years when he was appointed by King Charles at Buckingham Palace this morning.

Ms Truss had used her valedictory speech to stress the need to be "bold" as she defended her tax-cutting ideals despite being forced to reverse most of her policies.

She made no apologies for her disastrous mini-budget and stressed the need for lower taxes, before wishing Mr Sunak "every success, for the good of our country".

King Charles III welcomes Rishi Sunak during an audience at Buckingham Palace, London, where he invited the newly-elected leader of the Conservative Party to become prime minister and form a new government. Picture by Aaron Chown/PA Wire

After Mr Sunak was pictured shaking Charles's hand during a formal handover of power in which the king was "graciously pleased to accept" Ms Truss's resignation, he sought to explain why he was now prime minister.

"Right now our country is facing a profound economic crisis," he warned, blaming the lingering aftermath of the coronavirus pandemic and Vladimir Putin's destabilising war in Ukraine.

He vowed to place "economic stability and confidence at the heart of this government's agenda", after the financial chaos triggered by Ms Truss.

"This will mean difficult decisions to come," he said, but he promised to repeat the "compassion" he showed during the coronavirus pandemic.

Mr Sunak vowed not to leave future generations "with a debt to settle that we were too weak to pay ourselves".

"I will unite our country, not with words, but with action," he said, vowing to run a government of "integrity, professionalism and accountability at every level".

"Trust is earned and I will earn yours," he said in the speech lasting nearly six minutes.

He entered Downing Street after winning the swift Conservative leadership contest on Monday, with rivals Boris Johnson and Penny Mordaunt pulling their campaigns before a single vote was cast.

Mr Johnson, who had plotted a comeback less than two months after he resigned following a series of scandals, offered his "congratulations" to Mr Sunak just after his speech ended.

He welcomed the "historic day" and said "this is the moment for every Conservative to give our new PM their full and wholehearted support".

As he became the third prime minister based on the mandate won by Mr Johnson in the 2019 general election, Mr Sunak vowed to deliver on that manifesto's promises.

"All I can say is that I am not daunted. I know the high office I have accepted and I hope to live up to its demands," he said, having ruled out a general election in talks with MPs.

Instead he pledged to "build a government that represents the very best traditions of my party" as he prepares for a widely anticipated Cabinet reshuffle.

Mr Sunak will look to build a new top team with an eye on the task of uniting his fractious Tory party.

While not confirmed, Jeremy Hunt, who replaced Kwasi Kwarteng as Chancellor amid economic turbulence, is expected to remain at the top of the Treasury.

But it was thought likely that Business Secretary Jacob Rees-Mogg will lose out, even though he told the Telegraph he no longer believes Mr Sunak is a "socialist".

In her brief exit speech, Ms Truss celebrated reversing the national insurance hike imposed by Mr Sunak when he was chancellor.

She warned that the nation continues to "battle through a storm", but insisted she believes "brighter days lie ahead".

"From my time as prime minister, I'm more convinced than ever that we need to be bold and confront the challenges we face," she added.

"We simply cannot afford to be a low-growth country where the government takes up an increasing share of our national wealth and where there are huge divides between different parts of our country. We need to take advantage of our Brexit freedoms to do things differently."

In a statement this afternoon, Taoiseach Micheál Martrin congratulated Mr Sunak on his appointment as prime minister.

He said: "The close relationship between our two countries is built on shared history, deep cultural and economic ties, and strong people-to-people links.

"Our shared responsibility as joint stewards of the Good Friday Agreement, working together in partnership, is vital to support peace and prosperity in Northern Ireland, particularly now in the absence of a properly functioning Assembly and Executive.

"Building on work already underway, there is a real opportunity for the EU and UK to find jointly agreed solutions on the issues pertaining to the Protocol, and I urge Prime Minister Sunak to move quickly to substantive engagement with the EU on that basis.

"I am committed to a strong and deep British-Irish relationship and I look forward to early engagement with Prime Minister Sunak on the important issues we face on these islands and globally.

Former British prime minister Boris Johnson also offered his "congratulations", adding that "on this historic day, this is the moment for every Conservative to give our new PM their full and wholehearted support".

Congratulations to @RishiSunak on this historic day, this is the moment for every Conservative to give our new PM their full and wholehearted support.