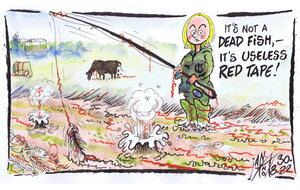 Liz Truss is the new leader of the Conservative Party and the next UK prime minister after beating Rishi Sunak in the leadership race.

She takes over from Boris Johnson and won with 81,326 votes from the Tory membership, to Rishi Sunak’s 60,399.

She will become the UK's third female prime minister.

Liz Truss praised “my friend” Boris Johnson as she accepted her victory in the Tory leadership contest.

She said: “I also want to thank our outgoing leader, my friend, Boris Johnson.”

She continued: “Boris, you got Brexit done, you crushed Jeremy Corbyn, you rolled out the vaccine and you stood up to Vladimir Putin. You were admired from Kyiv to Carlisle.”

There was a delay before applause from the audience.

Liz Truss received a standing ovation after her victory speech in central London.

In her victory speech Ms Truss said: “Thank you for putting your faith in me to lead our great Conservative Party, the greatest political party on earth.

“I know that our beliefs resonate with the British people: our beliefs in freedom, in the ability to control your own life, in low taxes, in personal responsibility.

“I know that’s why people voted for us in such numbers in 2019 and as your party leader I intend to deliver what we promised those voters right across our great country.”

She concluded her speech with a promise to “deliver a great victory” for her party in two years’ time.

The new Tory leader said: “We all will deliver for our country and I will make sure that we use all the fantastic talents of the Conservative Party, our brilliant Members of Parliament and peers, our fantastic councillors, our MSs, our MSPs, all of our councillors and activists and members right across our country.

“And we will deliver a great victory for the Conservative Party in 2024.”

“We need to show that we will deliver over the next two years.

“I will deliver a bold plan to cut taxes and grow our economy.

“I will deliver on the energy crisis, dealing with people’s energy bills but also dealing with the long-term issues we have on energy supply.”

Sir Keir Starmer said Liz Truss is “not on the side of working people” after she was unveiled as the new leader of the Conservative party.

Giving his reaction to the result of the leadership election at Friern Barnet School in north London, he told journalists: “We’ve heard far more from the latest prime minister about cuts to corporation tax over the summer than we have about the cost-of-living crisis, the single most important thing that’s bearing down on so many millions of households.

“There can be no justification for not freezing energy prices. There’s a political consensus that needs to happen. She needs to ask the question how she’s going to pay for that. Labour made it clear, it needs to be a windfall tax on oil and gas companies.

“So, she needs to show that she actually understands and can meet the challenges that are there after 12 years of failure of this Tory Government.”