Terminally-ill Charlie Gard is not "suffering" and international attempts to intervene in his case have revived his parents' hopes, the boy's mother has said.

Connie Yates said support from Pope Francis and US President Donald Trump, as well as medics in America and the Vatican, had given the 11-month-old more time after his life-support had been due to be switched off on Friday.

His parents want to take him for experimental therapy in the US but lost a lengthy legal battle after judges ruled in favour of doctors at Great Ormond Street Hospital, where Charlie is being treated.

Ms Yates said seeing him stricken in hospital and wondering when his last moment would be was "absolute living hell".

Charlie Gard's mum tells @GMB of the 'living hell' she's been through trying to get care for her terminally-ill son https://t.co/KA5fUujuzc pic.twitter.com/KP84rsoAJS

She told Good Morning Britain: "He's our own flesh and blood and we don't even have a say in his life whatsoever.

Ms Yates said the Pope's intervention came after she wrote a letter to him, although she did not receive a reply directly, but she did not write to Mr Trump.

She said: "It does give us a hope definitely, because there was no hope left. Charlie was going to die on Friday and, you saw the video we did, we were absolutely devastated.

"We had no control over it, the way it was done.

"And then it was going to be on the Monday instead but the I think the White House got involved over the weekend and then that changed things."

Charlie is suffering from a rare genetic condition and has brain damage and no-one can be certain whether or not he feels pain, GOSH has said.

Successive legal attempts by Charlie's parents failed as judges in the High Court, Court of Appeal and Supreme Court in London ruled in favour of GOSH doctors, while the European Court of Human Rights declined to hear the couple's appeal.

Ms Yates said five doctors, including two in England, thought the experimental treatment could help her son and 18 patients were being treated with the medication.

A US hospital has offered to ship the drug to the UK to help Charlie but Ms Yates said this had been offered as early as last December.

The hospital said it would take the boy in if "legal hurdles" could be cleared or send the medication to GOSH pending approval from government regulator the Food and Drug Administration (FDA).

Ms Yates said she had researched Charlie's rare mitochondrial condition "non-stop" and also been told there was a chance it could help Charlie, although GOSH medics argued it would not.

She said: "There's always been a chance.

"There is potential for him to be a completely normal boy but we don't know because we just don't know until we try.

"I've heard from doctors that there's around a 10% chance of this working for Charlie so I think that's a good enough chance to take.

"It's a one in 10 chance and in some sense people might say that's a small chance but when it comes to medicine that's a big chance.

"I don't understand it, euthanasia is illegal, suicide is illegal. How is this legal?

"It's in his best interests to have a chance at life."

Ms Yates and Charlie's father, Chris Gard, both in their 30s and from Bedfont, west London, are spending the last days of his life with him and recently gave him his first haircut.

Ms Yates said: "I got to keep his hair as well, just those little things that I keep.

"It sounds ridiculous but when I cut his nails I keep the little clippings in case it's the last time I cut them."

Charlie's parents will meet doctors at GOSH later after they sent a letter outlining what Ms Yates said was "new information" on the nucleoside treatment they are seeking for their son.

High Court judge Mr Justice Francis said the couple had, understandably, grasped at the possibility that the therapy might be "pioneering treatment".

But he said it had never been tried on a patient with Charlie's rare form of mitochondrial disease, there was "no evidence" it could help him, and testing it on him would be "unknown territory". 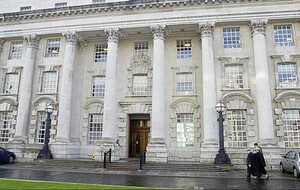