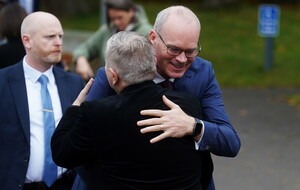 Mr Coveney said negotiations between Brussels and London over the contentious trading arrangements were continuing in a “positive light”, but said an imminent breakthrough was unlikely given the current domestic difficulties preoccupying the British government at Westminster.

Mr Coveney, who held talks with Secretary of State Chris Heaton Harris in Belfast today, said he did not think anything substantive would emerge before next week’s deadline for forming a new powersharing executive at Stormont.

Minister @simoncoveney and I agree that the best outcome for Northern Ireland is for the Parties to restore the Executive and avoid a winter election.

But, if no Executive is formed by 28th October, I am required by law to call one. pic.twitter.com/4c9SDYNMvg

The DUP is blocking the formation of a fully functioning ministerial executive as part of its protest against the protocol.

If a Stormont administration is not established by October 28, the British government has made clear it will fulfil a legislative obligation to call a snap Assembly election – December 15 has emerged as the likely date for such a poll.

Mr Coveney said both the UK and Dublin governments wanted to avoid an “unnecessary election” as he warned that the context of an electoral campaign could make it more difficult for London and Brussels to strike a deal over the protocol.

The minister said the ability to avert an election rested with Northern Ireland’s political parties, in particular the DUP, as he urged all sides to come together and form an executive before the deadline.

“Let me reassure you that the EU is absolutely listening to and willing to respond comprehensively to the concerns that have been raised by the business community and also by unionist representatives,” Mr Coveney told a peace building event in north Belfast.

“The Irish government, despite what’s sometimes said and written, has no hidden agenda, I can promise you that.

“We want an agreed way forward between the UK and the EU on the issues that have been raised around the protocol in a way that works for Northern Ireland.”

Speaking today, DUP East Belfast MP Gavin Robinson said regardless of whether an Assembly election is held, unionist issues with the Protocol must be addressed before devolution is restored.

Mr Robinson said: “An election just a few months ago told us that every unionist MLA is opposed to the Northern Ireland Protocol, yet the EU has failed to respond to this democratic statement. The EU negotiating mandate remains wedded to a Protocol which is unacceptable to unionists. This must change.

"The Protocol is driving up costs for consumers by a 25% tariff on steel used in building schools, roads, hospitals, and houses. It is driving up grocery costs by increasing haulage costs from GB to NI.”

Speaking to reporters after today's event, Mr Coveney added: “I think the chances of a major breakthrough between London and Brussels between now and the 28th of October is very unlikely. Not because both sides don’t want to move forward, but because there are a lot of other things happening in British politics that I think is very obvious for people to see over the last week and continuing into this week.

“And there simply isn’t the bandwidth in my view to get the kind of step forward that certainly we had hoped for a few weeks ago before the 28th.

“And so what I’m saying to people is that the negotiations will continue. I think they’re happening in a positive light.

“I think the British government and the EU are working through complex issues with a view to trying to get accommodation with each other and find a way of getting an agreement that both sides can commit to before the end of the year.

“But I think now political leaders in Northern Ireland will need to make choices, because of course there is no reason why the executive can’t be formed tomorrow or the next day.

“Four the five parties want to do that. And what I’d say to the DUP is that I hope they will reflect on the needs of Northern Ireland in the context of serious negotiations that are ongoing towards trying to find a resolution on the protocol issues.”

Mr Heaton Harris has repeatedly warned that he will call an election if the deadline passes without an executive being formed.

“The secretary of state is not bluffing,” said Mr Coveney.

“In my view, that does nothing to help the process of finding an agreed series of compromises that can settle the protocol issues.

“In fact, in some ways, it makes it more difficult because the environment that you operate in in the context of an election means that compromise is often more difficult.”

Mr Coveney said it was not for him to tell local politicians what to do.

“Political leaders of Northern Ireland will decide for themselves,” he said.

“But I hope that there is a context around the decisions that are made in the build up to the end of next week that can understand that the British government and the EU are trying to progress solutions for the protocol, predominantly to make it acceptable for people in Northern Ireland, in terms of businesses and many in the unionist community.

“There is a need for more time to do that, given the events of the last number of weeks.

“And I hope we can avoid an election, allow that process to continue, but also respond to the many other needs that communities in Northern Ireland need a government here in Stormont discussing and making decisions on.”

Taoiseach to consider taskforce to tackle issues on O'Connell Street